Slaves to your business

We are all complicit in modern slavery. Do you really know if there is forced labour in your supply chain? Because ultimately, the buck and the power to changed enslaved people’s lives, lands with you.

Originally from Myanmar, Aung Kyi had just quit his factory job when he met a ‘taxi driver’ out one night. After a few drinks, the taxi driver offered Kyi a place to stay. The next morning, he woke up in a room with 20 other people, to find that he had been trafficked to work on Thai fishing boats. Entrapped by a complex network of criminals, he was subjected to physical abuse, held at gunpoint and forced into labour to pay off extortionate ‘recruitment’ debts and interest. He escaped nine years later.

Thailand is the world’s third-largest exporter of seafood, employing more than 800,000 people in the sector. An Environmental Justice Foundation film on Thailand’s seafood slaves revealed that living conditions aboard the fishing boats are abysmal. Malnourishment and serious injuries are routine; fishers have reported being force-fed amphetamines to work 20- hour shifts for days at a time; executions are carried out openly to suppress dissent and cultivate intense fear.

“If we hadn’t caught any fish when the nets were pulled up, we were not given any food… If there was a chance before pulling the nets, we might get 15 or 30 minutes’ rest,” says Kyi.

SEE IT, SAY IT

Kyi’s story is far from unique. The majority of us are unknowingly benefiting from modern slavery in the food and clothes we buy, the suppliers we choose and the companies we invest in. Consumers have gained from the exploitation of migrant workers picking fruit in Australia; Malaysian factory workers subjected to forced labour to make smartphones; enslaved fishermen catching seafood to stock our supermarket shelves.

Reporting obligations relate to the steps taken to respond to the risk of modern slavery in the operations and supply chains of the reporting entity and its controlled entities. Unlike other jurisdictions, the reporting criteria are mandatory.

“It is crucial that reporting entities begin reviewing their supply chains and collecting data to comply with the new reporting obligations,” says Norton Rose Fulbright partner Abigail McGregor, who also sits on the Human Rights and Business Working Group of the Law Council of Australia.

“Many Australian businesses may be unaware of the risk they have slavery in their business or supply chains. The incidence of modern slavery within Australia appears to be relatively low, but the concern is that there is a low level of awareness of the issues, and the actual incidence may be much higher, both domestically and overseas.”

40 million people were subject to modern slavery as of 2017

IT’S ON OUR DOORSTEP

Control Risks director Iona Cheng agrees. “I think people in Australia tend to think about modern slavery as an issue exclusive to high-risk jurisdictions like Pakistan, Cambodia, Bangladesh. But we need to pay attention to what’s happening on our doorstep, too – the foreign holiday worker employed to pick fruit, who may have their passport detained, and may be put in horrible accommodation and working conditions, threatened by the employer that they will not renew their visa, or even in some cases, sexually harassed.”

Cheng adds that some of the high-risk industries that typically have more issues than others are ones that have a higher number of migrant workers, for example hospitality and construction.

According to the Walk Free Foundation Global Slavery Survey 2017, in excess of 40 million people globally are subject to some form of modern slavery and collectively around $150bn per year is generated in the global private economy from forced labour alone. In the Asia-Pacific Region, 30,435,300 people are believed to be ‘enslaved’ (66.4% of all people enslaved); and 4,300 people in Australia are enslaved.

Walk Free Foundation chairman Andrew Forrest says: “The shock to me, as a business leader, has been the prevalence of modern slavery within the supply chains of most global companies. My eyes have been opened to the victims, hidden within multi-tier supplier relationships, silently paying the cost of rapid globalisation, falling through the gaps in regulation of emerging markets.”

Norton Rose Fulbright and the British Institute of International and Comparative Law advise that risk managers can begin to tackle this issue by following the human rights due diligence (HRDD) principles as defined by the United Nations Guiding Principles (UNGPs). Supply chain HRDD is a process that is broader than introducing a Supplier Code of Conduct, adding human rights screening of suppliers to existing human rights processes and including standard contractual protections into supplier contracts.

“There is a spectrum of exploitation, and modern slavery sits on a continuum of exploitation,” argues Dr Martijn Boersma, University of Technology, Sydney and author of Addressing Modern Slavery. “Usually, that means if you have other labour issues and forms of exploitation in your supply chain, such as people being denied freedom of association or their labour rights being otherwise curbed, that usually is a red flag there may be other issues. Risk managers should look for lesser labour abuse as an indicator of an issue, such as underpayments or excessive overtime. If you’ve got those things happening, there might be worse conditions in your supply chain that you’re not necessarily aware of.”

Control Risks’ director Cory Davie says while some firms may rely on their contracts with suppliers to try to protect themselves, ultimately, it will be the firm who suffers the reputational shock. “If it’s a T-shirt with your logo being made in a factory, or your crates being loaded with fish on a fishing boat holding people who are essentially slave labour, the reputational ramifications are such that it really doesn’t matter what contractual elements you have in place. There must be individual corporate responsibility for getting all the way to the very end of your supply chain yourself to check for slavery issues, not just trying to passing the buck.”

Forrest is even more blunt. “Our businesses have the power to influence change within supply chain networks, to drive up standards and remove the profitability of modern slavery. The cost to us is minimal, as the profit is made by the enslavers, who disappear when approached or discovered. The buck, however, stops with us, and it is our reputation that is burnt.”

“Modern slavery surrounds us in our everyday life in Australia and throughout our increasingly interconnected world. The crime may – but will not always – look different today, but at its core it remains the same. Those people most vulnerable and marginalised are exploited for the personal and commercial gains of another. Empirically it has been proven, and instinctively we know, that reliance on slavery prevents long-term sustainable development both for a country’s economy and civil society.” 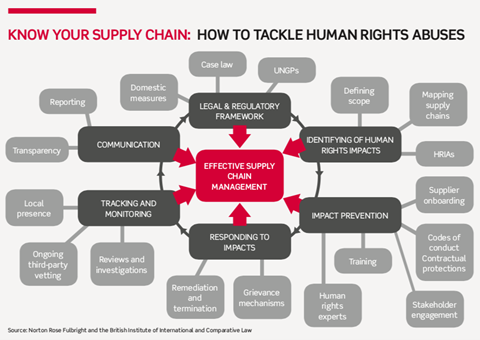