Instinct is your most important weapon

As Sydney begins to recover from the latest terror occurrence, our editor Lauren Gow reflects on why preparation is important but the ability to act on instinct is even more so.

When the news alerts started flashing across my computer screen and phone on Tuesday afternoon, my stomach lurched. ‘Knifeman on loose in Sydney’, ‘6 victims and counting’ and ‘Terror strikes Sydney CBD’. Sadly, my wave of nausea is not a rare occurrence anymore.

I was living in the UK for all three terror attacks in 2017 – Westminster, Manchester and London Bridge and saw the public response firsthand. Two of my closest friends were in Borough Market during the attack and my job frequently took me to Westminster and Manchester. These close-calls were one of the motivating factors to move back to Sydney. I thought it was safer.

That’s the issue with the permeation of terrorism. None of us are immune. None of us are safe and the faster we accept this, the better off we all will be. I realise this seems like a fatalistic attitude to have but I see it as realistic. Being realistic allows you to prepare for the worst whilst hoping for the best. 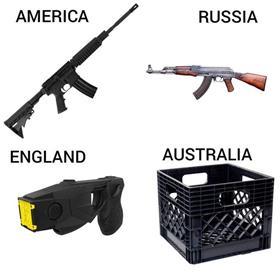 That last platitude is basically the underlying principle of risk management. You, of course, hope that you will never experience your worst-case scenario but it doesn’t hurt to be prepared for it. It never hurts to have a healthy reverence for what could happen and a (theoretical at least) understanding of how you would react.

The reaction of bystanders to Sydney’s latest terror act (or act of a mentally unwell man… The facts are yet to be categorically determined) have been the subject of memes this week. I know, memes. The social media equivalent of a comedic aside and certainly not something that you could imagine being an appropriate response to the loss of life.

However, these memes were actually social commentary on the different “preparation for the worst” methods of various countries. Sydney’s attacker was taken down by a group of bystanders wielding weapons immediately at hand – in this case, a shopping trolley, a milk crate and a chair. For the US and Russia, it is guns and in the UK, tasers.

Of course, these are generalisations and this opinion piece is not meant as an examination of which method is right or more effective. The point is that scenarios do not always play out the way you imagine. You can scenario test a situation 100 times in your organisation but a single influencing factor could change everything when the moment comes.

Yes, preparation is important but so is the ability to act on instinct if needs be. Don’t be afraid to use the tools you have immediately to hand when the moment of truth comes. You never know, that one decision may save yours or someone else’s life.