Asia experienced one of the world’s worst Covid-induced food protests when residents of Manila took to the streets on 1 April. Food insecurity has since played a role in protests across the region, including in India and Bangladesh.

In its latest Civil Unrest Index report, Verisk Maplecroft says it expects that these initial protests are a sign of much bigger problems to come. South Asia and, to a lesser extent, Southeast Asia are potential powder kegs of unrest amid a perfect storm of food shortages, higher prices, sweeping job losses and plummeting remittances.

South Asia is rated the highest risk region globally in 2020-Q2, ahead of MENA and Latin America. This means companies and investors, already reeling from travel restrictions, lockdowns, a see-sawing stock market and oil price crash, face another headache that is unlikely to go away any time soon.

Some of the key points from the report include the fact that:

Not a single Asian country receives a low risk rating on the Food Import Security Index, with most falling into the medium or high risk categories. But while the risk of a surge in unrest is elevated across the region, it is most acute in three South Asian countries that already witnessed instability ahead of the pandemic.

Bangladesh, Pakistan and India are currently ranked the 10th, 13th and 19th highest risk countries globally in the index and already considered extreme risk. Alongside neighbouring Myanmar, Verisk Maplecroft expects these countries to face large-scale spikes in protests that will likely see their position in the index slip even further. 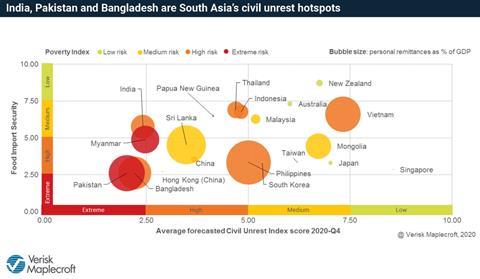 Risk will remain elevated until the pandemic runs its course, according to the report. Disruption in the food supply chain, rising food prices, skyrocketing job losses and dwindling remittances will create a potent recipe for instability.

Compounding the problem is a likely return of protests around preexisting grievances temporarily suppressed by the pandemic – such as around the new citizenship law in India. This means that companies and investors across the region will need to pay heed as unrest will continue to linger long after sources of more short-term disruption – such as lockdowns and travel restrictions – are lifted.