In early 2022, new rules requiring mandatory corporate due diligence on human rights and environmental issues are expected to come into place in the EU.

The law requires companies and their directors to monitor, identify, prevent and remedy risks to human rights, the environment and governance across their entire value chain.

It comes after successful litigation against major brands around the world for violations of this nature. Earlier this year, for instance, indigenous people from Brazil and Colombia brought a lawsuit against retailer Casino in a French court over the selling of beef linked to land grabbing and deforestation in the Amazon.

And in 2017, the first climate change lawsuit of its kind was brought in a German court after a Peruvian small-scale farmer - with the support of the environmental NGO Germanwatch - sued German energy giant RWE.

The farmer, Saúl Luciano Lliuya argued the firm - as a major CO2 emitter - should assume some responsibility for the adverse impacts of climate change. His community is under threat of catastrophic floods as a result of glacial retreat.

For risk managers, there are significant implications. The introduction of new laws around ESG [environmental, social and corporate governance) and the growth in complexity of supply chains, will prove a major challenge.

“Several European countries have brought in legislation that obliges companies in their territory to do due diligence into their value chains,” explains Nigel Brook, partner at Clyde & Co. “It depends on what country they are in but usually it’s to do with environmental or human rights violations. And if you find it in the value chain, you’ve got to report it and try and put it right.”

“What’s coming is an EU Directive, which will put this in place right across the EU. If that gets passed early next year, all 27 Member States will have put a law like that onto their statute book.”

If they are found wanting, national authorities will have the power to impose significant penalties.

“It looks like there will be substantial fines if you don’t do this. A bit like with GDPR, where a percentage of global turnover is the maximum fine. And there might be compensation available for people affected in the value chain.”

“With the length and complexity of supply chains nowadays, this is going to be pretty onerous.”

For its part, FERMA has argued that while the new laws should take account of stakeholder interests in corporate decisions, it is against the implementation of mandatory supply chain due diligence at an EU level.

The association argues that existing processes and frameworks, such as ERM, already encourage companies to look at the ‘risks’ and ‘impact’ in companies’ operations throughout the supply chain.

According to research by Verisk Maplecroft, palm oil and cobalt are the two raw materials posing the greatest risk of land grabs globally. Further, minerals critical to the transition to a zero carbon economy - including silicon, zinc, copper and rare earths - are also highly associated with the practice. 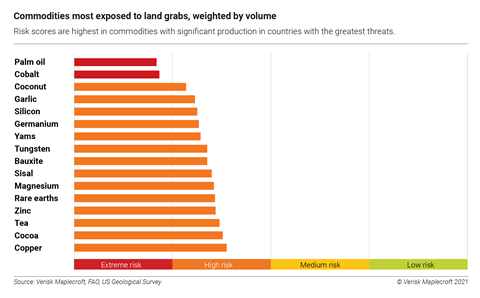 The research makes a clear link between land grabs (a practice where people are illegally forced from their homes so miners and farmers can move in) and the loss of natural capital.

As pressure grows for raw materials, organisations that do not invest adequate oversight of their supply chains will face an increased risk of being exposed to illegal and unethical practices. These are “hidden ESG threats”, according to Verisk, and must be carefully assessed.

“Unless threats to human rights in the supply chain like these are addressed by companies and investors, it will be increasingly hard to justify labelling the likes of EVs, lithium-ion batteries and solar panels as ‘clean’ technology’,” it warns. 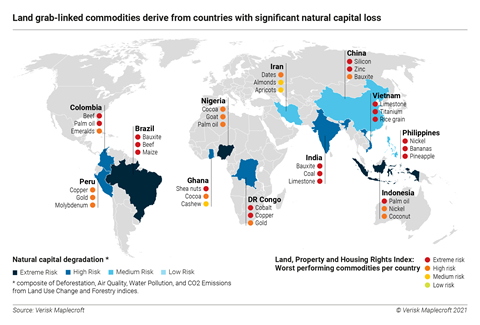