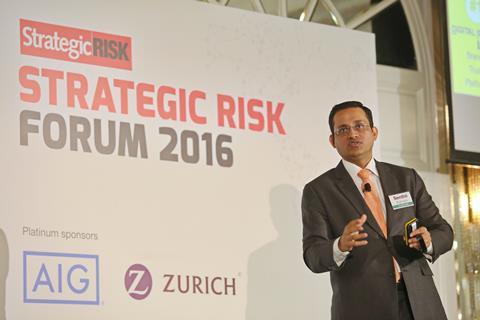 The Internet of Things (IoT) is set to transform businesses in the next two years, with vast implications for the risk and insurance sector.

But many companies in Asia-Pacific will fail to embrace the IoT, warned Accenture Internet of Things Center of Excellence director Senthil Ramani (pictured).

“Since the year 2000, half of the Fortune 500 have disappeared. We predict this could happen again in the next 15 years if companies don’t act now to integrate the Internet of Things into their business,” he said.

Speaking at the Strategic Risk Forum on 17 May in Singapore, Ramani discussed the key opportunities of the IoT, giving practical examples of mining, healthcare and consumer companies that have adopted IoT into their business models.

Indeed, some 55% of the audience at the event said that the IoT, above other new technologies, would have the greatest impact on their business in the next two years. Coming in second, with 27% of the votes, was increasing automation and robotics, while 12% of the audience chose artificial intelligence / virtual reality.

Joining Ramani on stage for a discussion about the risk management implications of new technologies, was Lazada Group head of group risk and internal audit Gordon Song and AIG Asia-Pacific and Japan head of casualty Roy Wilmoth.

One audience member asked the panel if new technology could see businesses become too automated.

“The real risk is being too complacent with the amount of automation that you have. Or, to put it another way, to put too much reliance on automation and take away that human judgment,” he said.

“Therefore, the role of risk managers is not just to look at sensors and data, but also to add their judgment to that from their experience in a world without automation.”

“The approach needs to be around automating some of the back office functions first, which are easy to automate. You need to be very clear in your digital strategy and be smart about which parts of your business you automate,” he said.

Key to that transformation will be the implementation of chief digital officers, the panel said.

At the event, only 75% of delegates worked for firms that employed someone with that role.

But this needs to change, Ramani argued.

“The role of the chief digital officer is becoming very critical. It’s starting to be talked about in Asia-Pacific much more. It’s a difficult role, but there needs to be someone within the business that is accountable for the digital strategy. This individual needs to work with the various business functions, and it becomes an orchestration role,” he said.

The panel was also asked how to balance collecting meaningful data and being intrusive.

Ramani said the two most important elements of digital trust were security and ethics.

“The industrial world is very diverse and complex and so you’ve got to have mechanisms for making sure the data you collect is meaningful. Where as in the consumer world it’s all about data transparency; it’s about how secure it is and how you create an ethics framework around that,” he said.

AIG’s Wilmoth said: “Part of the problem with the insurance industry as a whole is we’ve tried to put product first, without always fully understanding clients’ risks. We need [clients] to actually engage with us and explain to us what’s really important to [them]. Without that insurers can’t design the types of solutions that are needed.”

Indeed, 67% of the audience believed that insurance innovation would be led by clients, rather than insurers (17%) or brokers (6%).

Wilmoth said AIG was working with universities, such as Clemson University in the United States, to build frameworks that will assist in quantifying the impacts of new technologies to more accurately price new technology risks.