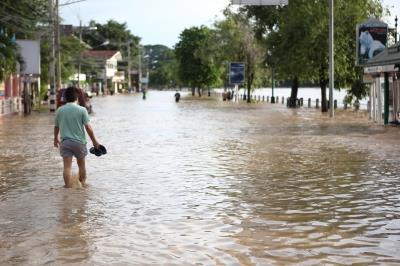 A climate change report by the World Bank has brought the focus of potential tropical cyclones in South-East Asia and associated flood risks to the fore, with warnings that the region could face a rise in more intense storms.

Linked to that are forecasts that maximum surface wind speed could creep up to by 7% to 18% for warming of about 3.5°C for the western North Pacific basin, with much of the activity shifting north and eastward. Maximum wind speed of tropical cyclones making landfall is said to rise by 6% and 9% respectively for mainland South-East Asia and the Philippines, combined with a decrease of 35% and 10% respectively in the overall number of cyclones making landfall.

In addition, as sea-surface temperatures increase, tropical-cyclone related rainfall is expected to jump by up to one-third – indicating a higher level of flood risk in low lying and coastal regions.

The World Bank focuses on the risks to agriculture, coral reefs and the impact to coastal areas as a result of the 2°C and 4°C warming across Sub-Saharan Africa, South Asia and South-East Asia. But what catastrophe risk models also indicate is that flooding, including river flooding, inland flooding and in particular coastal flooding associated with storm surge and cyclones have the potential to become exacerbated.

Eqecat model development group senior vice-president David Smith said: “Our Asia typhoon catastrophe model covers much of the region and incorporates wind, storm surge, and rainfall-induced flooding impacts. With respect to climate change, there are essentially two questions: how are the frequency and severity of tropical cyclone events likely to change over time; and for a given type of event, how are the wind, storm surge, and rainfall-induced flooding impacts likely to change?

“The jury is still out on the first question to some extent, although a lot of modeling suggests that there will be fewer but more severe tropical cyclone events in the future. On the second question, in the absence of any mitigation, the storm surge impacts are likely to be exacerbated by sea level rise, and there is a fairly solid consensus that there will be more rainfall, hence more flooding.”

The question is how prepared is the Asia-Pacific region to deal with the increased frequency of floods and storm surge induced by more severe tropical cyclones?

RMS chief research officer Robert Muir-Wood said: “Allied with the rise in sea level and ongoing subsidence of many Asian coastal cities, if storm intensity increases, the resulting storm surge will be both higher and extend further inland.”

Businesses in the Asia Pacific region are yet to fully understand their risk of flood, he said: “In this region there is little or no information about high resolution flood risk because there is often no leading government agency established to supervise information around flooding.

“The 2011 Thai floods provide a powerful lesson – businesses affected by the floods, along with their insurers and reinsurers were all unaware of how exposed they were. I don’t think that sort of uncertainty would arise in Europe.”

RMS’s catastrophe risk models evaluate the impact of storm surge. While a number of coastal cities are at high risk, businesses located in those cities may not appreciate their exposure.

“For many coastal cities this risk might not be fully recognised because there hasn’t been a big storm surge in the past 50 years”, says Muir-Wood. “Coastal cities in India that could be affected by storm surge including Mumbai, and Calcutta. Myanmar and the Irrawaddy Delta were severely affected in 2008 by Cyclone Nargis – and at the time there was a complete lack of awareness that these areas were in the frontline of risk. Cities in Southern China around the Pearl River Delta, are very exposed to storm surge, as well as cities in the Philippines. Sea level rise and increases in the intensity of storm have the potential to make flooding significantly worse.”

He added: “We’ve been looking at Bangkok, for example: a city that is extremely low lying and almost unprotected from the sea. It is only 1m above sea level and could potentially suffer significantly from a tropical cyclone storm surge. But a typhoon has not passed into the northern Gulf of Thailand for several decades, so people don’t generally concern themselves with the problem.”

The conclusion is that risk managers in coastal locations in Asia Pacific need to dig deeper to find information on their tropical cyclone risks and the associated impact of storm surges and coastal flooding.

Muir-Wood said: “Risk managers needed to explore objective data on flood risk, and when people tell them it doesn’t exist, they may need to commission their own investigations to see where their properties are situated relative to the sea and rivers. Corporate risk managers absolutely need to ask deep questions about flood risk.”

Eqecat’s Smith said: “[Risk mangers] need to consider all aspects of their business, including supply chain risks. Also, longer term considerations such as where to locate a building or other facility should be made with an eye to minimise the risk from sea level rise, coastal erosion, and potentially increased coastal and inland flooding.”