In 2018, a number of large storms have battered the globe leaving a trail of physical and economic destruction behind them. StrategicRISK is looking back on the year by examining the costliest natural disaster.

When Hurricane Michael hit the Florida panhandle in October 2018, it was the third most intense in US history. Winds of 155 MPH were the fastest ever recorded there, just missing out on Category 5 status.

Naturally, Michael caused devastation along the Florida panhandle. It flipped fighter jets at Tyndall Air Force base, destroying swathes of the base at a cost of $6bn. Flying debris closed roads in Tallahassee, 130 kilometres inland. 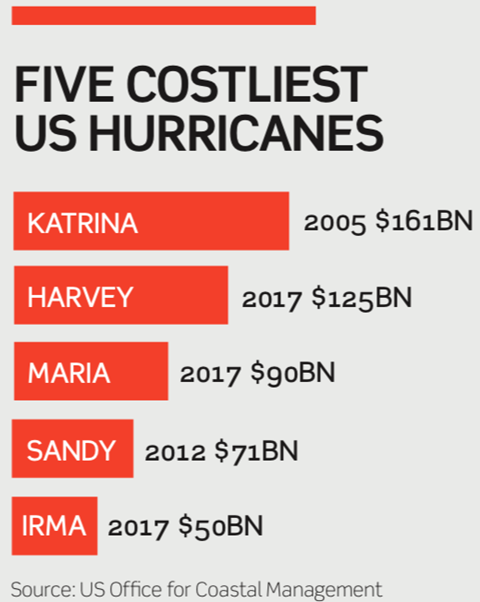 The question for risk managers is whether the number of storms is increasing. The answer: almost certainly. There have been 16 ‘above normal’ hurricane seasons in the past 25 years, easily the worst period on record. The year 2017 recorded 40 ‘rapid intensification’ hurricanes – in which at Cat 1 can accelerate to a Cat 5 in less than 24 hours. Hurricane Maria in 2017 caused $90bn partly for this reason.

Andre Martin, head of innovative risk solutions, Swiss Re Corporate Solutions spoke to StrategicRISK about how the APAC region is particularly exposed to natural castastrophes.

”Many megacities in Asia, defined as having more than 10 million inhabitants and hosting important commercial, manufacturing and logistics hubs, are located in the Philippines, China, Japan, India, Indonesia and Bangladesh which are all highly exposed to natural perils.

“For example, Cyclone Debbie in Australia, Typhoon Hato which ripped through China, Vietnam and Hong Kong, and Typhoon Lan (Paolo) which affected both Philippines and Japan all feature in the top 20 most costly insurance losses of 2017. The earthquake in Palu, Indonesia, brought down hotels, shopping malls and countless houses, while tsunami waves as high as six metres scoured its beach front shortly afterwards.

”With Mother Nature becoming increasingly unpredictable, awareness and media attention around the increasing risks relating to climate change are at an all-time high. Particularly in areas regularly hit by natural catastrophes, consideration should be given to the economic consequences of the natural disasters and how the business as a whole will be affected directly and indirectly when choosing an appropriate insurance program.”

LESSON: CAT 4 AND 5 HURRICANES ARE INCREASING IN FREQUENCY