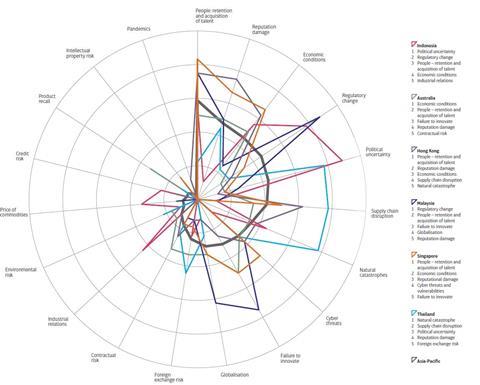 StrategicRISK and Zurich hosted a series of events across Asia in 2013. Roundtables were held in Singapore, Malaysia, Hong Kong, Thailand, Australia and Indonesia, attended by the region’s leading risk managers and brokers. Held between July and November, the focus of each event was to determine the key threats – and opportunities – that risk professionals operating in each country considered most important.

StrategicRISK conducted extensive research among the wider risk community in each nation – and the results of this can be seen in this spidergram (click here to download a high resolution version ) where the perception of risk is proportionate to how far it is from the centre of the graph. The nearer to the outside edge, the bigger the concern.

Taking each country in turn it is clear that human capital – specifically retention and acquisition of talent – ranks highly among the worries of risk professionals in Singapore.

Reputation issues are a big concern in Hong Kong, while regulation is a key talking point in Malaysia.

And with elections looming in 2014, it is hardly surprising that political risk ranked highest in Indonesia. Had polling taken place a few weeks later, however, Thailand may well have challenged Indonesia on political uncertainty afer the dissolution of parliament and a snap election was called. Instead, supply chain and natural catastrophe ranked highest, primarily as a result of reaction to the 2011 floods.

Risk professionals in Australia were more even in their risk assessment, with no single risk significantly outweighing the rest, although human capital, reputation and failure to innovate were all strong contenders.

The findings from our research are considered in more detail throughout the rest of this Risk Report and are backed up with a series of expert insights and thought leadership.

More country-specific information can also be found by going to our dedicated Risk Report website hub, where each of the six national risk reports can be read in full at www.strategic-risk-global.com/AsiaReport