The wonder – and the woes – of Woolworths

Unforeseen crises forced Grant Katz, the retailer’s risk and assurance general manager, to postpone his interview four times in a fortnight. The stress left him feeling exhausted. So why does he like his job so much? 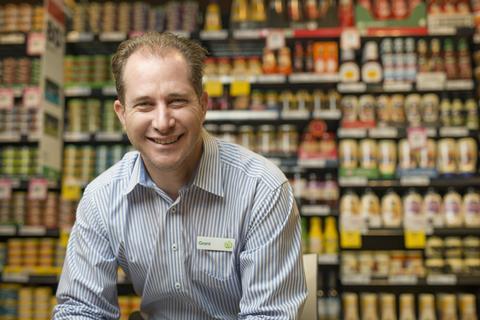 Woolworths Group risk and assurance general manager Grant Katz has one small request at the end of our hour-long interview and photoshoot.

“Please can you Photoshop the big bags out from under my eyes?”

Katz makes the request in jest, but there is more than a spec of truth behind his tired eyes.

In the two weeks leading up to our interview, the meeting had to be rescheduled four times on account of a string of unexpected crises.

First there was a data leak of customer details from the group’s major retail chain, Big W. The leak saw it in the headlines of national news outlets and resulted in the website being closed to online trade for a number of days. Then, a few days later, a 7.5 magnitude earthquake struck New Zealand, damaging a number of the group’s Countdown grocery stores and distribution centres. That’s not to mention the product recall and customer injury issues that can happen daily across the group’s 4,000 stores.

Wearing the hat of the crisis management lead, it is Katz’s job to co-ordinate the 80-strong risk and audit team. “Every day is all well planned, except when it goes wrong, and things do go wrong a lot,” he laughs. “I have incident management, fraud and forensics, internal audit, product safety and enterprise risk [in my remit]. So we’re the ones that are getting fed the information [from incidents] and we’ve got to co-ordinate what actually happens in response.”

Woolworths is the one of Australia’s most recognisable brands, known primarily for its ownership and operation of one of the country’s two major supermarket chains. It’s also the largest takeaway liquor retailer in Australia, through outlets including Dan Murphy’s and BWS, and the largest hotel and gaming poker machine operator in the country via its ALH Group business.

The company, once a star performer on the Australian Stock Exchange, has had a tough couple of years, with its supermarkets business trounced by rival Coles and its Masters hardware chain proving a big drain on the balance sheet. That triggered a collapse in its share price, which sliced $15bn from its market capitalisation in 12 months alone. In its 2015/16 annual report, the group posted a $1.2bn loss – its first loss in 23 years as a public company.

“Unfortunately, the perception of Woolworths was we were too expensive and the customer experience was poor,” Katz explains. Which is precisely what attracted him.

“I liked the fact that Woolworths was going through some challenges and I wanted to be part of the solution to those challenges,” he says.

It’s a slow-moving beast, but Katz says the fruits of their labour are starting to show. “Especially in the food space, there’s lots of green shoots. We’ve had positive sales growth in the quarter that’s just passed.”

Company culture is another thing he speaks about at length. “With a lot of new board members, a new CEO and a lot of change in the senior management team, you feel as though you’re part of something completely new. There’s a cultural shift. Culture doesn’t change overnight, but we’re starting to see little things occurring,” he says.

“When you look at what’s happened with Woolworths… you had a more ‘command and control’ organisation previously. That works well when things are going great, but in my opinion it doesn’t work well when you’re going through challenges. You’ve got to make people accountable,” he says.

Under new chief executive Brad Banducci, the operating model is essentially to make the businesses run independently, within a framework set by the group.

“Freedom within framework,” explains Katz. “That goes a long way to change the culture but it’s not a quick fix.”

Still, like most risk managers, he faces the challenge of getting internal buy-in from stakeholders on the value of his work. “The challenge is that Woolworths is not highly regulated like a bank. When you look at the bank, you’ve got big stick APRA,” he says.

“For us, it’s very easy to tick the box in terms of ASX principles to say I do [risk and compliance]. But to really show how [risk management] adds value is the challenge.

“If you don’t make mistakes, or you do things better, how do you articulate that in terms of the value? When you look at people safety, it’s very easy to measure because people are getting injured on a daily basis. So, by just looking at the number of incidents, you know whether you’re doing better or not. But things that might occur once every five years or more, how do you know risk management is actually working? That’s the difficulty.

“That’s the toughest part of a risk role in a non-highly regulated company.”

But Katz says the relationships he has built internally over the past 18 months are helping to change this.

“You have to have difficult conversations a lot of the time, but it’s about building relationships. So, if you get those relationships, then people are willing to trust you,” he says. He is lucky, he adds, to have a supportive boss in chief financial officer David Marr.

So, what’s the biggest risk he and his team have to manage?

“It’s around the customer value proposition. You’ve got to make sure that what you’re delivering satisfies the customer,” he says simply.

Some of the key risks to this are around cyber security and brand reputation, he adds.

“Cyber security is a big risk in all organisations. We have online facing websites – Dan Murphy’s online, Woolworths online – and if you have a major leak or someone hacks in, it’s going to be front page of the paper. The Big W one was in the paper and that was minor.

“We have a CISO – a chief information security officer – and their remit is looking at all of these things. I don’t believe you can prevent it completely … the question is how will you react.”

With a large-scale effort to turn the company around, a number of major projects are being launched that also need to be seen through a risk lens. From greater automation of supply chains to store upgrades and new technology, Katz’s role is varied, to say the least.

Like many of his peers, Katz didn’t grow up with ambitions to work in risk management. Having qualified as a chartered accountant, he held a number of finance and investment banking roles in his home country of South Africa before moving to Australia in 1999.

“I was reluctant to have kids in South Africa because I didn’t know what the future might hold. I was looking for more stability in terms of lifestyle,” says the father-of-two.

His first role in Australia was at construction and engineering firm Lendlease as the GST project delivery manager.

“South Africa had GST long before Australia … so I thought I’d use [the job at Lendlease] as an opportunity to learn the Australian systems and, with GST being a transaction tax, what a great way to learn. I did that for 12 months.”

Katz then took a role at the ASX, which was a combination of finance, treasury, risk management and strategic planning functions. While working there, he completed his MBA, which he credits as the turning point in his career.

“When you look at risk and strategy, they go hand in hand. That was the start of my exposure to risk management,” he says.

After a few years, he was lured back to the accountancy firms, which at that time were looking to grow their risk management offerings.

But while on secondment to Mirvac, he was offered a permanent position to lead the company’s internal audit and risk management team.

As any risk manager in the construction or engineering space will attest, ‘optimism bias’ is one of the key challenges to overcome – so after a few years at Mirvac, Katz took on the role of chief audit executive at Metcash, the Australian wholesale distribution and marketing company.

Summing up, he says he’s enjoying both the challenge and the reward of using risk management to make a difference.

And as Woolworths’ fortunes start to turn, hopefully that means Katz can work on his beauty sleep.