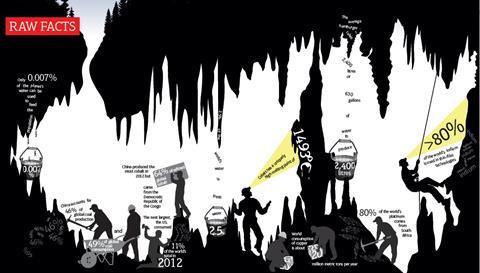 As the number of people in the world increases, humans will require more food and water, as well as materials to build homes, conurbations and appliances.

From a risk management perspective, the factors that contribute to resource scarcity pose significant risks for manufacturers, suppliers, distributors and consumers.

“The importance is then placed upon localised knowledge to understand the constraints on the commodity itself, other market trends and associated risks,” he says.

However, he adds that the principles of commodity management are not consistent across industry and that, within organisations, the value and perception of risk towards critical materials can often seem disjointed.

“If you talk to someone in procurement – an engineer, project manager, product manager or production manager – they will each place different importance on different elements of the risk or perceived risks,” he says.

“There is definitely a need for a more holistic view within risk management to balance the interpretation of risk.”

To protect societies from the effects of physical and economic scarcity, one option for governments is to impose constraints on the extraction, exportation and pricing of resources.

Recently, the World Trade Organization (WTO) condemned China’s exportation cap on rare earth metals tungsten and molybdenum (both used in alloys) following a complaint by the US.

America requested consultations with China regarding its policies on these metals in 2012, with the EU, Japan and Canada joining latterly to form a dispute settlement body (DSB) with China.

Panel debates were held earlier this year and the resulting DSB report concluded that “the overall effect of the foreign and domestic restrictions is to encourage domestic extraction and secure preferential use of those materials by Chinese manufacturers”.

In September, China stated that it would implement the DSB’s recommendations in a manner that respects its WTO obligations within a reasonable period of time.

Moreover, the UN estimates that by 2025, 1.8 billion people will live in areas plagued by water scarcity, with two-thirds of the world’s population living in water-stressed regions as a result of use, growth and climate change.