A new survey from Willis Towers Watson (WTW) and Oxford Analytica found nearly 70% of global business leaders stated they had scaled back operations in a country as a result of political risk concerns or losses.

According to a survey from Willis Towers Watson and Oxford Analytica, increasing geopolitical concerns are causing a rise in political risk exposures with 55% of global organisations with revenues greater than $1bn experiencing at least one political risk loss exceeding $100m in value.

In addition, the survey revealed that the political risk implications of emerging market economic crises are increasing, reflecting the market reaction to a flare-up in emerging markets – most notably in places like Turkey and Argentina. 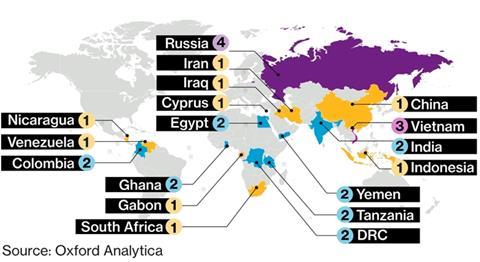 “It is clear from our findings that political risk has increased significantly, now becoming a reoccurring and material cost of doing business,” said Paul Davidson, Chairman and Chief Executive Officer, Willis Towers Watson Financial Solutions. ”If these levels remain elevated, companies will fall under increasing pressure from shareholders for greater levels of transparency around the losses actually incurred. Companies will need the ability to monitor, quantify and manage these risks as well as develop strategies to mitigate them.”

Stuart Ashworth, Managing Director, Willis Towers Watson Financial Solutions, Asia Pacific, added: “Whilst exchange transfer losses and political violence were identified as key concerns for companies, the possible consequences of populism and trade wars are also being brought into sharp focus. The global interdependency of modern business mean that companies in Asia Pacific could well suffer even if their home country was not the intended target of a trade tariff. This will be even more acute in countries whose economies are tied to or dependent on China. Reports from the Berne Union also signals that political risk is on the rise and that its members has indicated that claims from investment insurance in 2017 were the highest on the record.”

“Companies typically grew up managing cyclical economic risks, not political. However, with the recognition of rising losses due to political risk, it can no longer be excluded from executive decision-making. To better mitigate political risk exposure, companies need to reframe how they operate. Taking steps to manage political risk must become a requirement of doing business, not simply regarded as an inevitable cost of operating in challenging environments,” added Simon Coote, Deputy Director, Oxford Analytica.

For our latest StrategicRISK analysis of political risk, click here