What should your risk function deliver in the 2020s?

The 1990s was the decade of training. Then came the decade of assuring, when audit committees started driving a stronger risk management agenda. This decade many organisations have developed a “look forward” culture, but what does the next decade in risk need to bring? Bryan Whitefield, risk consultant and director of Bryan Whitefield Consulting has the answer

I wrote about why risk management has been failing in many organisations. The reason I gave was because risk functions often don’t deliver much value to the business served. The root cause, risk professionals often overcomplicate things and business leaders switch off and assume the “talk to the hand” pose.

So, the obvious answer to the question of what should your risk function deliver in the 2020s is value. “What value?” is a fair question to ask.

Consider the diagram below showing Risk Leadership through the decades. You will see that the 1990s was the decade of training. In Australia and New Zealand we introduced a risk management standard to organisations. The most common response from non-risk people was, “Managing risk is something I do every day. My staff must be having trouble with it given all the things that go wrong around here. So please train them up.” The result, the risk process became a compliance activity for staff and the culture of tick and flick was born.

Then came the decade of assuring. When Audit Committees started driving a stronger risk management agenda. The interpretation of business was that risk was important because the board, and specifically the board Audit Committee wanted assurance that risk was being managed well. That is, “We have to do this risk stuff for the comfort of others. Not because it adds value to what I do.” The result was a culture of “be prepared” as the auditors are coming. The whole shebang resulted in a lot more red tape.

This decade many organisations have developed a “look forward” culture by using analytics to derive strong insights for decision making. High-risk industries such as the chemical industry and the mining industry have led the way. The finance sector also made some great headway. In Australia for example, insurance companies are not as vulnerable to collapse as they were in the days of HIH. With the regulator leaning hard on the industry, more and more insight into the risk profile of certain products and industry sectors was gained. Insurance industry executive decision making has improved as a result.

Unfortunately, as evidenced by the Finance Services Royal Commission, while the balance sheets of finance sector organisations were much better managed, their conduct left a lot to be desired. Analysis alone does not change behaviour. 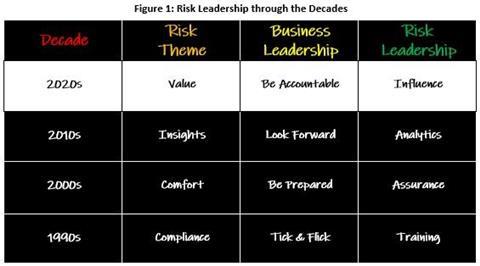 2020s– The decade of influence and accountability

What of the next decade? We will need the kind of leadership that will ensure a culture where everyone leans in and takes accountability for managing the uncertainty surrounding their decision making. Not hold up their hands in surrender and say, “It is complex, it is hard. Same for our competitors.”

We will need leaders who instil a strong values-based culture in organisations. Those who refuse to put short-term profit over sustainable outcomes. And who are willing to challenge those leaders that do.

We will need leaders aware of unconscious bias in their decision making and that of others. Leaders who will put in place the mechanisms to manage their own bias and to challenge those leaders that do.

Those same leaders will need to stand up to financial analysts that drive this type of behaviour from leaders in publicly traded companies. And they will need to learn to do so in very compelling ways.

And that means we in the risk profession need to convince leaders to hold themselves accountable to the values of the organisation, to recognise and manage their unconscious bias, to think long-term as well as short and to add to their already considerable business acumen. And we need to convince them we can help. Hence we must develop our ability to influence. Better than ever before.