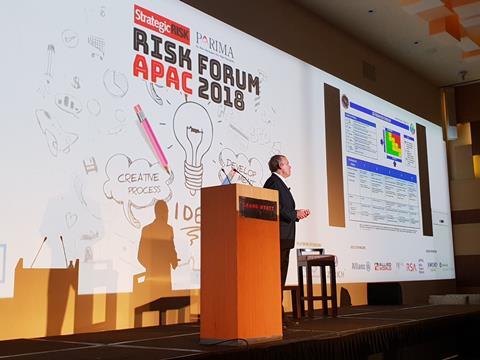 Space is perhaps the most unforgiving environment imaginable, and a tough test for the risk function.

Top management buy-in is vital, and for that risk management needs to be viewed as valuable behaviour to encourage, not just a task to complete.

That was the word from Mike Lutomski, former risk manager for NASA and the International Space Station (ISS), opening keynote of Risk Forum APAC 2018, hosted by StrategicRISK and PARIMA, the Asia Pacific risk managers’ industry group, held in Singapore today.

“Back in the early days of human space flight and rocketry the rockets would blow up 50% of the time,” said Lutomski, whose current job is the director of system safety, risk and reliability at SpaceX.

“Space is an unforgiving environment for any carelessness. Things just behave very differently up there,” Lutomski told the 250 assembled risk management professionals in Singapore.

He noted a false parallel with aviation, which went from the Wright brothers’ first tentative flight to supersonic aircraft fifty years later. “Unlike rocketry…where you have to take that first leap off the cliff.”

“You get on a plane you have a one-in-ten-million chance of not coming back,” said Lutomski.

The success rate of rocket launches nowadays is around 98%. “[Space] is still a high-risk business even today,” Lutomski said.

The sheer number of potential risks puts added pressure on qualifying risks early, to get as much mitigation as possible done early in the project. “So many more risks will be discovered, and you can’t do all that later,” he added.

What not to do

Lutomski listed a selection of the worst ideas about risk management, to avoid them at all costs.

These included organisations deluding themselves that they have no risk to manage, or that their programme is too small to do risk management.

Fears that making risks public will kill the risk management programme, that customers will overreact on hearing about problems, or react negatively if told they are a source of risk, were other pitfalls described.

Some organisations claim that they can deal with problems “as they arise”, Lutomski warned, while other risk managers can believe that identifying risks is bad for their career.

Certain risk managers get waylaid with tasks like developing risk software versus bureaucratic form-filling, while others get preoccupied trying to “predict what will happen a year from now”, he added.

“Too often risk management is perceived as a task and not a behaviour to be valued,” Lutomski warned.

Getting over the perception that risk management is “just another tax” on operations is key to driving behaviours, he suggested.

Taking the mystery or magic out of risk management is important to getting the boss to buy in, Lutomski stressed.

“To sell it to management you need to demystify it. In the industry in which I work, managers just want to know what it is they need to work out,” he said.

If or when the worst happens, it is the chief executive who often falls on their sword, Lutomski noted.

“It’s always the CEO or President who gets fired; it’s all about the top management when something goes wrong,” he said.

Making risk management function a core process is also crucial, he suggested, avoiding at all costs the idea that the risk function can be “an optional add-on” to operations.

Quantitative risk management has its costs, however, he suggested, meaning it can only be applied to the top risks being faced.

International collaboration was essential to Lutomski’s role running the risk function for the ISS.

The ISS brought together European, Japanese, Canadian, US and Russian space agencies within one collaborative project – each contributor developing their own segments to the space station.

The left side of instruction panels would be in Russian, and the right side in English, he noted. “It is their rocket that takes you up and down, after all,” he noted.

What is true of linguistics is also true of risk management, with the risk function playing an important role in making sure enough information is available, and in removing barriers for safety rather than creating them.

Trust and communication between the countries’ team members has been a crucial factor in the success of the project, he emphasised.

“I had friends that were former military, and in the 1990s the Soviet Union went from enemies we were trying to kill, to our Russian colleagues on the ISS,” said Lutomski. “And the way you do that is form relationships and you bond together.”

Space exploration has reached a stage where commercialisation and tourism play a much greater role than during the government-driven Cold War era. “The only constant – in my industry and yours – is change,” Lutomski said.

In 1986, when the space shuttle Challenger exploded shortly after launch, killing all on board, NASA faced family lawsuits and a threat to its continued existence. “Things totally changed, and we learnt a lot of lessons after that,” Lutomski said.

In 2003, when the Columbia shuttle was lost in another lethal accident, the situation was transformed, Lutomski suggested, partly because – through the ISS – humans were always in space.

“We put out a statement saying the goal of space exploration must go on,” he said.

The final frontiers have moved on amid the era of commercial space ventures, stressed Lutomski, with low earth orbits and satellites overwhelmingly a commercially-driven environment.

“Let NASA go for the hardest stuff like going to Mars. There’s no model yet or return on investment for that. Today, the most lucrative bit to space are the satellites,” Lutomski said.

“It’s still a high-risk industry, but it’s not this exotic industry it once was – it’s business,” he added.