In the final part of our series, risk specialist Warren Black explains how organsations can embed a systemic sense of resilience into organsations.

Embedding a systemic sense of resilience within modern organisations

Complexity scientists and resilience experts commonly argue that resilience is a retained characteristic of a natural system, not a selectable behaviour. Resilience is part of a complex natural system’s genetic code and so those organisations who aspire to become highly resilient will need to weave a systemic strain of resilience into their DNA. Although there is currently no universal agreement as to how exactly organisations might do this, one method which offers some promise is that of resilience system-mapping”.

Resilience system-mapping encourages organisations to map out their own unique system of resilience enablers, characteristics and metrics which they can then aspire to embed, monitor and mature. The idea behind resilience mapping is to build into an organisation a demonstrable immune system which enables that organisation to become genetically resilient to the emergence of disruptive forces.

For too long, organisations have been able to claim they are resilient without demonstrating what specifically underpins their resilience. In this regard, Resilience system-maps help organisations to better visualise and performance manage their own personalised system of resilience.

Remind me again, exactly what is it about your organisation, that makes it resilient?

Provided below is an example of a Resilience System-Map (best viewed in A3 format). This particular map was developed from researching a broad range of Highly Resilient Natural System characteristics and then mapping them out into a potential logic flow based on the three contributing elements of the Disruption Equation. In essence, the provided map reflects a collection of observed natural system’s characteristics which are transferable to modern organisations and have the proven ability to neutralise the Disruption Equation aka zero-sum game. 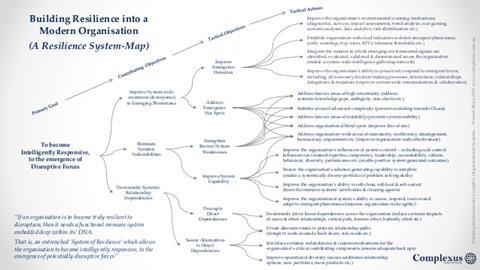 It is important to note, that in order to secure their long-term survival most highly resilient natural systems only had to master a select number of these documented resilience characteristics, in ways that were suited specifically to their personal circumstances.

In the same vein, modern organisations now need to determine their own specific resilience characteristics which will allow them to survive through the Fourth Industrial Revolution, and then map them out into a personalized immune system to be monitored and matured.

A Case Study in Resilience System-Mapping: The 100 Resilient City’s Project

The 100 Resilient City’s (www.100resilientcities.org) is an initiative founded in 2013 by the Rockefeller Foundation which aims to help 100 select global cities implement a measured system of resilience within each. By doing so, the project aims to establish over time a global sense of resilience underpinned by a fully connected and collaborative network of 100 highly resilient city’s (New York, Calgary, Melbourne, Bangkok, Barcelona etc.)

The idea was borne from the observation that as the world’s population rapidly increases towards 9 billion people by 2030, we are all going to become more exposed to the disruptive shocks, stresses and up-swells associated with mass population. Complex social problems such as unemployment, illiteracy, vagrancy, crime, unrest, famine and the like will almost certainly increase along with any population increase and thus cities globally need to look towards establishing a sense of resilience to emergent social issues.

As part of this project, each of the 100 selected cities has determined their own specific ’system of resilience’ which they now actively monitor and mature. Each city’s specific resilience system was determined by benchmarking their city’s retained characteristics against a Central Urban Resilience Model (see picture below), in order to identify personal vulnerabilities and weaknesses. The central model, of course, provides a portfolio of aspired to urban resilience metrics which when fully matured, will help a typical major city achieve a state of higher resilience. 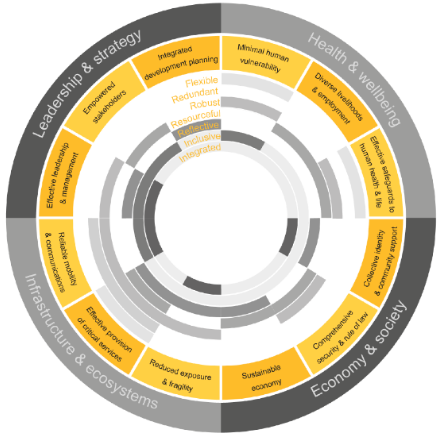 The beauty of this systemic model is that it makes genetic resilience visible. Each contributing city can physically demonstrate what they are doing to instill a sense of resilience within their respective system genetics. Modern organisations can learn much from such an initiative.

It would be easy to dismiss the need to actively embed a systemic sense of Resilience within modern organisations as merely being the latest risk management “fad”, but this is not true.

As the Fourth Industrial Revolution gains more and more momentum over the next few years to decades, the ability to respond positively to ever-emerging industry changes is going to play an even larger role in organisational risk management.

The complex systems’ view of resilience thus offers a means to future-proof organisations for long-term survival by helping them become intelligently responsive to those disruptive phenomena which will almost certainly emerge as the world advances down its complexity path. Resilience system-maps, in particular, allow organisations to better understand and monitor how this might be achieved in a manner that is both visible and scientifically valid.

So what the risk management community is now witnessing is not a risk management fad but rather a fundamental change in philosophy whereby industry is taking positive steps towards adopting risk mitigation strategies aligned to the proven teachings of the complexity sciences. In this regard, there is much that modern organisations can learn from the complexity sciences when it comes to better controlling complex-emergent risks. The study of natural complex systems, in particular, offers a plethora of learnings as to how to better control risks associated within complex operations, complex projects, complex leadership decisions and complex social networks.

Considering how our working world is not getting any simpler, only more and more complex. It is only a matter of time before the invested risk management community fully accepts that complexity driven risks need to be controlled by valid complexity solutions.

This is part three of a three-part series. Go here to read part one and part two.