No premiums, no play

Before the 2018 World Cup kick-off, one essential item needs to be in position – and it’s not the ball. Allianz Global Corporate & Specialty (AGCS) head of entertainment international, Michael Furtschegger tells StrategicRISK where the biggest risks lay in the upcoming event

More than 1 billion people – one in seven of the global population – tuned in to watch the 2014 World Cup final between Argentina and Germany. FIFA, the sport’s governing body, uses such figures for bragging rights to proclaim the quadrennial event “the greatest show on Earth.”

No matter the competing claims of the Olympics to the same title, the World Cup outstrips them in terms of visitors, worldwide audience and prize money on offer – $400 million. Yet, one element unites the World Cup, the Olympics and even the smallest local sports event – the need for insurance.

“Without insurance there would be no World Cup, no Olympics or little organised competitive sport at all,” says Michael Furtschegger, Head of Entertainment International at Allianz Global Corporate & Specialty (AGCS). “For few would take on the risk required to stage an event, particularly one the size of the World Cup.”

Given the oversized dimensions of “the greatest show on Earth,” the insurance needed is also spectacular. When it announced the prize money pool for the 2018 World Cup, FIFA earmarked $134 million alone for insurance for clubs whose players get injured– more than a quarter of the prize money on offer to the 32 competing teams.

Yet, FIFA player insurance is only a drop in the overall insurance requirements. By the time Messi, Ronaldo & co. take to the pitch on one of the 12 venues spread throughout Russia, almost every aspect will be covered.

“In terms of insurance, the World Cup is not significantly different to the Olympics,” says Furtschegger. In his role, he assesses the risks of massive music concerts and tours, sports or corporate events for Allianz and develops tailored insurance policies for the many different organizations involved. The World Cup and the Olympics are always on the radar. 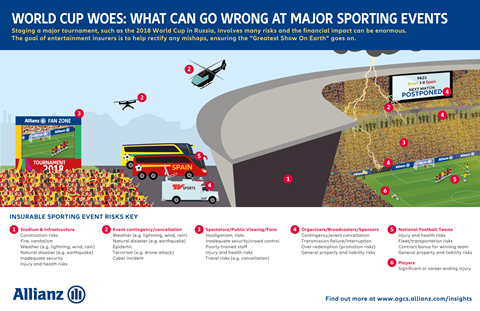 Staging either is an enormous risk for both the host country and organizers. The final bill for Russia is expected to be around $11.8 billion, though that doesn’t include some new stadiums and costly infrastructure. There is also big money at stake from corporations: advertising, broadcasting rights and sponsorship.

The financial consequences of cancellation or postponement due to a natural catastrophe, infrastructure failure or a terrorist attack are great. Both Russia and FIFA have insurance in place that pays out if a game is abandoned or moved to another location, or even if the entire World Cup is canceled.

While the World Cup has yet to be disrupted, an outbreak of foot-and-mouth disease in 2001 caused several Six Nations rugby games to be postponed. In 2011, an earthquake hit rugby-mad Christchurch in New Zealand, forcing eight games of the Rugby World Cup scheduled for later that year – including two quarter finals – to be shifted. This created a problem for organizers. Ticketholders were offered either refunds or new tickets at the other venues, leading to a drop in revenue. Fortunately, contingency insurance protected against the financial fallout.

For the 2018 World Cup, the list of those that have bought risk cover, apart from FIFA, include broadcasters, sponsors, travel firms, airlines and retailers. For the 2010 World Cup in South Africa, Lloyds estimated the total insurance for the event at $9 billion, including $4.8 billion for stadiums and training venues and $4.2 for other business opportunities linked to the event. Some of these opportunities you wouldn’t even think of, explains Furtschegger.

“Take telecast rights. If the opening ceremony is delayed even by a few minutes by something as simple as power failure that will affect the broadcasters because they’ve got advertising slots in place. There will be insurance covering such an interruption.”

This means that when the whistle blows to start the opening game pitting host nation Russia against Saudi Arabia on June 14, everything from the stadium itself to Lionel Messi’s legs (covered for 750 million euro) down to the ticket in a fan’s hand are insured in some form. On top of this is the individual travel and health insurance of the fans traveling to the month-long event.

The main difference between the World Cup and other insurable events, says Furtschegger, is the value of the teams. Ahead of the 2014 World Cup, Lloyds released a report showing that the total collective insurable value of the competing teams was estimated at €7.7 billion euro ($10.5 billion). Protecting the players comes on top of all the other insurance.

Player insurance is an example of how the insurance needs to trickle down through the various levels at such an event, says Furtschegger. “FIFA has an insurance program to cover injury to the players, payable to the national teams, the national teams themselves have insurance, such as liability and personal accident insurance for their players, while the players can have their own cover to protect their earnings.”

In terms of risks, Furtschegger assesses the Russian World Cup, despite it being the most political in history, as only slightly more elevated than similar events. “Since the 1972 Munich Olympics, you always have the risk of terrorism and this is only marginally higher given the political dimensions of Russia’s involvement in Syria and in the disputed Caucasus region, (home to one of the host cities, Rostov-on-Don),” he says.

Cyber terrorism, which was also a feature at the Sochi Winter Olympics in South Korea, is a risk that has to be considered. But perhaps, the biggest individual risk, is hooliganism. “Euro 2016 was marred by brawling of English and Russian fans,” says Furtschegger. “While the Russian authorities have promised to tighten security, it cannot be discounted, so traveling fans are advised to have good international health and travel insurance.”

Allianz helps insure FIFA Club, as well as the 2018 World Cup and partners with various national teams, including the current champions, Germany. Through its subsidiary in Russia, Allianz has also partnered with the government to insure infrastructure and stadiums, as well as liability programs. Allianz also offers health and travel insurance to fans traveling to the World Cup