Can he fix it?

A life-long drive to discover what is broken and make it right has taken BHP’s Robb Eadie all around the world. Now his sights are set on transforming the risk profession. Meet: The fixer. 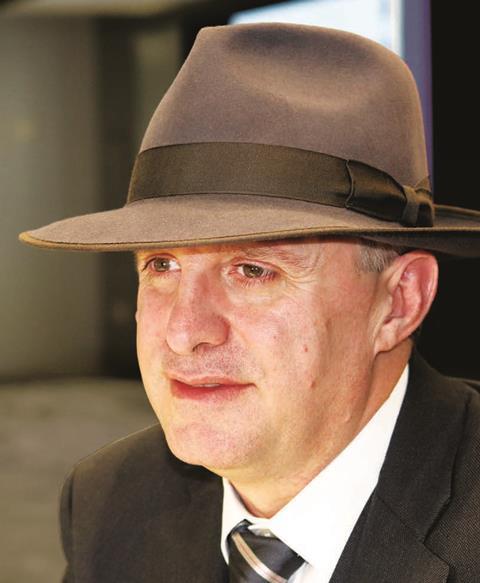 “By nature, I’m a fixer,” says Robb Eadie, chief risk officer at multinational mining, metals and petroleum company BHP, as he takes off his distinctive hat and places it carefully on the table in front of him, before shifting it slightly once more to straighten it.

“Whether it’s fixing motorcycles in the garage, fixing risk systems in BHP or fixing human systems in terms of people and culture, it doesn’t really matter to me. I just like fixing things.”

It is hard not to like Eadie from the moment you meet him. His strong Glaswegian accent, sharp wit, charm and self-deprecating humour make it easy to forget we are here in a little windowless room in Melbourne. For a man whose 36-year career has spanned a dozen roles in an astonishing 18 countries, it is really hard to know where to begin to unpick his life. So we simply start at the beginning.

FROM MEDICINE TO OPERATIONS

“Throughout my childhood, I wanted to be a doctor. I went to Glasgow [University] and lasted one term. University is a huge transition for any young person and I struggled to connect with the people I was placed with.”

Eadie is searingly honest about his decision to drop out of medicine or “human engineering” as he jokingly dubs it. “My dad is Sri Lankan and my mum is Scottish. I felt different in many places in Glasgow because a mixed-race background was not something that was openly welcomed at that time, and even less so in the upper echelon of medicine.”

“I decided I didn’t like medicine and went to do ‘proper engineering’ – that is, chemical engineering – at the University of Strathclyde. It was a change of university and a change of focus and I never looked back.”

Eadie pauses slightly, amending ruefully: “Actually, there have been moments where I briefly regret the decision, because I think it would’ve been nice to deliver treatment but it was never to be, sadly. I’ve done very well for myself doing what I’ve done.” And just like that, his infectious smile returns.

Eadie’s career really began in operations roles, which took him all over the world, quite literally. He takes a deep breath to explain: “From the UK, in Scotland, I went to Canada, moved back to London and then joined BP back in Scotland.”

Dare we ask, how did you end up in Melbourne?

Eadie laughs: “Well, this actually came about quite interestingly. I knew that I had the opportunity to

take all this risk experience I had gained but I also understood what I wanted to do in the latter stages of my career, so I set up a consultancy and did some work with various organisations, from Apple through to Shell. It was a whole variety of organisations over a three-year period, the last of which was BHP.”

“The beauty of the consulting model was that I got to tell lots of organisations what was broken and what they have to fix. I was very good at telling them what was broken.” He laughs again, then adds: “But the downside of it and what was missing for me, as a fixer, was I didn’t get to fix it. They paid me for my knowledge and my information, but as a fixer that really doesn’t satisfy. BHP was the first to ask me to fix it.”

“I’m probably a one stroke, two stroke, three,” he says, smiling. “Okay, let me explain. I do recognise that there’s a definitive place for risk registers and the rest of the traditional tools. But a risk assessment, for example, you can do in a relatively agile way, and the same with a risk review.”

“I also like to solve and fix issues that remain in my opinion unsolved. So the conundrum of risk appetite, for example, is where many people have to use the binary analogy you gave, either a one model or a two model. One model is a generic paragraph statement that says we take risk wherever we choose to take it and we manage it properly. Full stop. Model two is a 184-page analysis and quantitative assessment of which risk and what value and what KRI and what metric and all the rest of it.”

“Neither of those worked for me, because model one isn’t enough and model two feels too cumbersome. In my view, risk appetite is a bit like a cake recipe in that it has many ingredients. It’s why my solution to the risk appetite at BHP is a 10-page document. That 10-page document links to the risk categories, which have executive ownership. In turn, that executive ownership is directed by the qualitative statement, which is defined by the board. That then goes to the 51 group risks, which then cascade to 770 KI’s.” He pauses to take a breath.

Eadie’s enthusiasm is clearly evident, but is it really this easy to achieve? He thinks so: “It’s a very simple process that allows you to see quite clearly and quite categorically what the appetite of the board is and how management has interpreted that and implemented that. So you can see why I have an element of traditional, and I have an element of agile, but I actually also like to solve the conundrums that currently exist.”

Innovation is clearly a driving force behind his enthusiasm but it doesn’t come without its complications, admits Eadie.

“The problem with fixing, especially in the innovative world, is most organisations and most corporate professionals will ask you a very basic question when you innovate: ‘Who else does this?’ If the answer is no one, because it’s new, then invariably they will say, ‘Well, we should wait until somebody does it and then we’ll just let them do the learning.’”

“It’s more challenging and it can be more risky in terms of setting yourself up for some degree of challenge, scrutiny and analysis. But that’s what risk is all about. Risk is about taking the right sort of risk, not taking no risk.”

But is the struggle worth the reward? “It’s rewarding to me because it’s my passion. So, if I see something that I think needs fixing then I’m barely unable to stop myself from doing so. But I don’t think that’s the case for most people.”

We move on to the inevitable question of the perception of risk management as a profession; another area Eadie has strong views on.

“The perception that risk is just a compliance exercise… the truisms, or the equations as the engineer in me would say, that define my approach to risk are: You need good process plus capable people. Plus a culture that rewards, acknowledges and encourages and incentivises the right sort of behaviour.

Variability equals cost plus risk, and performance equals process plus capability plus culture. Those are my learnings, which I take from the many, many incidents that I’ve had to deal with in my career.”

The sheer breadth of Eadie’s experience means he approaches his ‘worst-case scenario’ situation in a very different manner to many risk managers. “The 2 a.m. internal conversation in my own head doesn’t often occur because I’m either still awake trying to figure out how to fix something anyway, or I found a way to fix it and so when implementation moves in I sleep like a baby. I’ve had lots and lots of bad things happening in both my career and in organisations that I’ve been in. Invariably, if you’re thinking about it, you shouldn’t be thinking about it,you should be fixing it.”

On that note, Eadie has his sights set on transforming the risk profession. Like StrategicRISK, he believes the changing nature of risk means risk management also needs to change.

“I think we should be pursuing and supporting the creation of risk as a professional endeavour in the same way as accounting or law or engineering. I don’t think we are joined up as a faculty from a thought process perspective and I don’t think we’ve sorted the theory. I want the basic principles and tenets of what it is we do to be clearly articulated.”

“I would like to see a situation where we as a faculty have leaders in this arena and actually get our act together and start structuring it as a subject matter in its own right.”

But Eadie is not marching blindly into the abyss and is acutely aware of the profession’s limitations. “I’m still waiting to see whether it is a vocational categorisation.

So where to next for this fixer? He probably won’t be at BHP forever, he admits. “My track record says I fix things and I go. Do I ever think I will stop being a fixer? No. I’ve not stopped in 36 years and I don’t see it changing any time soon.”

“One of the downsides of being the way I am is once I’ve fixed it, I just move on and do something else, which is why I’ve done so many roles in my life, in so many places in my life. I quite like the process of fixing but once that’s done, I’m not afraid to move on. This is something again that a lot of people have as a barrier, but I don’t.”

We would say “watch this space” but chances are, Eadie will be on to his next fixer-upper. SR

On 5 November 2015, an iron ore mine tailings dam in south-eastern Brazil, operated by Samarco (a subsidiary of BHP and Vale) suffered a catastrophic failure, devastating the town of Bento Rodrigues with mudflow, killing 19 people and displacing more than 700. Though this occurred prior to Eadie joining BHP, we asked for this reflections on handling such tragedies.

“One thing as a fixer is to be able to repair these things that have gone wrong and make sure they don’t go wrong in future,” says Eadie. “This is the one part that satisfies me most in doing the job that I do. No matter how big or how small the disaster, there’s always learnings to be had. In my opinion, many organisations are not great at truly being willing to learn.”

He continues: “The second part of that is many organisations don’t actually look at eliminating the risk, as opposed to managing the risk. The first phase is: Can I eliminate this? Yes, tick. If I can’t eliminate it, I then have to prevent it. Tick. If I can’t prevent it, then I have to mitigate it. Tick. That’s the order. It’s a fixer thing, as opposed to: ‘How can I better manage this?’”

“Having said that, I can’t get rid of everything, because some are a strategic imperative or an integral part of the business. Obviously, it’s very difficult to get rid of a mine if you’re a mining company.”