Become a solider of risk

The military is good in a crisis, or so accepted wisdom has it. So, if your business is facing a critical period, Oliver Wyman partner David Gillespie asks who better to take lessons from than those who have been on the real front line?

The military and the private sector are worlds apart but, when it comes to the need for increased agility, they share many of the same goals. In the past two decades, necessity has forced military organisations to change their leadership and organisational models. Private sector organisations are increasingly having to do the same in the face of an unprecedented external environment and its daunting rate of change.

How well companies respond often depends on how effectively they have prepared. You can hope that inspirational leadership will get you out of a crisis but the insights of interviewees indicate you would be better off implementing structured and aligned changes to how the company operates well ahead of time.

No one I spoke to claimed the military was agile all the time – far from it, especially away from live operations. However, the consistency of agile responses from best practice units and the common underlying factors was telling. Agility in the moment does not just happen by chance, and the modern military might just be a useful source of inspiration to ensure your company responds effectively when it matters most. 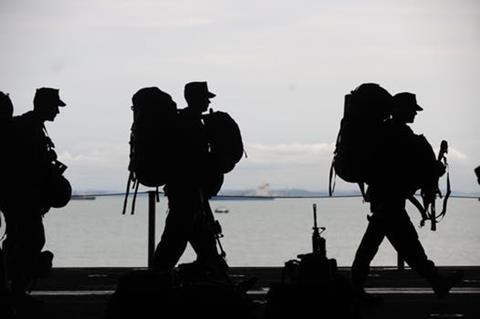 Everyone we interviewed was at great pains to emphasise the importance of existential risk in increasing agility. As one person said, “When you have the chance of dying, it tends to focus the mind.” Battlefield situations by their nature require rapid, often innovative responses. Story after story brought into sharp focus the personal risks military personnel take daily and how this creates an environment demanding speed, adaptability, and innovation. One interviewee explained, “The person who makes order out of chaos quickest is the person who wins.”

Tellingly, almost all the examples interviewees gave of high levels of agility were from operational situations. Remove the existential threat of battle and military organisations, despite all their training and practice, can themselves become slow and bureaucratic. Urgency is reduced, internal politics are exaggerated, and organisational turf wars develop. Suddenly distributing decisions as far down as they will go is ’a nice-to-do but not a necessity’; time becomes the enemy and inter-service rivalry creeps in.

Harnessing existential risk is in many ways the hidden multiplier to agility in the moment.

One interviewee powerfully brought the effect of existential risk to life when describing how British medical teams in Afghanistan took the initiative to adapt standard procedures in response to high battlefield mortality rates. Faced with a challenging environment, they collated and analysed data in the field to drive unprecedented levels of innovation. Through a range of innovations, including one known memorably as “magic pixie dust,” the survival rate of people classified as “unexpected survivors” on the battlefield increased to more than four times that achieved, for comparable injuries, in civilian peacetime hospitals24.

Harnessing existential risk has long been seen as valuable to business. Jeffrey Immelt, on the eve of stepping down as CEO of GE, wrote in a Harvard Business Review article about the importance of “getting yourself to the point of profoundly believing the world is changing and that the survival of your company depends on either anticipating the change or being in the vanguard of those reacting to it”25. In a study of 32 private equity firms, Jeffrey Cohn concluded that for private equity firms “urgency trumps empathy”26. It’s no wonder that John Kotter listed “not establishing a great enough sense of urgency”27 as the number-one reason why transformation efforts fail.

Research indicates companies are more likely to experience a data breach than a person will catch the flu in a given year.

Yet in the modern age, it is the risk of cyberattacks that perhaps represent the most pressing danger. Robert Mueller stated in 2012, that cyber would overtake terrorism as the US’s top concern. Six years on, research indicates companies are more likely to experience a data breach than a person will catch the flu in a given year28. The impact of cyberattacks can be rapid and existential. The US National Cyber Security Alliance found that 60% of small companies were unable to sustain their business within six months of an attack. It’s no wonder Jamie Dimon stated in his recent letter to JP Morgan shareholders “I cannot overemphasize the importance of cybersecurity.” The question is not whether companies face existential risks but whether they can harness them to galvanize the organization.

No interviewee made a comparison between the risk to individuals on a battlefield and corporate risks. But when the chance that a public company will be delisted in the next five years could be as high as one in three29, the need harness that reality to increase agility in the moment is not an abstract concept but a daily priority.

Click here to read the read of David Gillespie’s article.