US vs China among geopolitical flashpoints

Should relations deteriorate it could trigger an aggressive tit-for-tat policy response, with significant implications for global markets and corporates

Five geopolitical rivalries, including the US vs China, have more than a 50% chance of spilling over into some form of military confrontation in the year ahead, according to new research released by strategic risk intelligence company Verisk Maplecroft.

This could involve threats, posturing, or the actual use of force, according to the Interstate Tensions Model (ITM), a predictive algorithm that assesses hundreds of country pairings to provide a probability between 0 and 100 that two nations will engage in a militarised dispute.

The US-China pairing is identified as having one of the highest risks globally, with a 58% probability of such a scenario occurring in the next year – an increase of 19% over the last year (see Figure 1).

North Korea vs South Korea, India vs Pakistan, Greece vs Turkey and Azerbaijan vs Armenia are flagged by the ITM as the other geopolitical match-ups to watch based on multiple variables within each bilateral relationship, including the frequency of verbal conflicts events, military spending, regime type, foreign policy preferences, and whether there is a history of previous disputes.

Corporates now in the geopolitical sights of rivals

Should US-China relations deteriorate further it could trigger an aggressive tit-for-tat policy response that would have significant implications for global markets and corporates.

Washington would likely tighten export controls and extend sanctions against firms with links to China’s military, further curb the ability of Chinese SOEs and domestic champions to access American capital, and double down on efforts to reduce America’s reliance on China as a source of critical minerals.

Beijing’s retaliatory playbook would probably feature import restrictions on US LNG, crude, coal and agricultural goods, politicised regulatory probes against US firms operating in China, cyber-attacks and potentially the arbitrary arrest and detention of an American citizen or two.

US partners and allies are also likely to remain on the front line of any backlash from Beijing, as Australian exporters of wine, barley, cotton and coal exporters can attest.

“The corporate sector is increasingly viewed as a legitimate target by sparring strategic rivals, and the unwary risk getting caught in the crossfire of one of the world’s various geopolitical flashpoints,” says Hugo Brennan, principal analyst at Verisk Maplecroft. 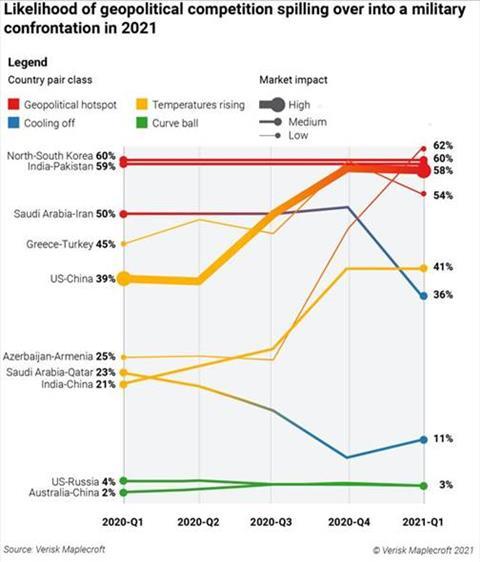 The geopolitical situation Joe Biden inherits at the dawn of his presidency is significantly different to when he last held high office in 2017. Great power competition between the US and China has accelerated and is now a defining characteristic of the international arena. How Biden squares up to the challenge will shape the geopolitical risk landscape over the coming year and beyond.

While neither the US or China want to resort to force to resolve their many differences, there is an increasing likelihood that both sides will use military threats and posturing to project power. Reports that Chinese bombers conducted a simulated strike against a US Navy carrier group in the South China Sea in January 2021 is one such example and likely a sign of things to come.

“The danger is that such muscle flexing, through a combination of miscommunication, misunderstanding and miscalculation, will inadvertently result in the actual use of force in theatres such as the South China Sea or the Taiwan Strait,” says Brennan.

Biden faces pressure from both sides of the Congressional aisle to maintain a tough policy towards Beijing, and his characterisation of China as America’s “most serious competitor” during his first foreign policy speech suggests hopes for a détente are wide of the mark.

Biden takes reins as US influence on the wane

With the rules-based global order fraying in the wake of the Trump administration’s disregard for international norms and its haphazard foreign policy-making, ‘strongmen’ such as Erdogan and Putin have profited from the resulting power vacuum.

Biden will find reining in their actions a tricky prospect. The storming of the US Capitol building by Trump supporters on 6 January and the domestic divisions it exposed will likely only embolden Washington’s international rivals further.

Within this context, the ITM flags the Greece-Turkey pairing as another likely geopolitical flashpoint, with a 54% chance of a military confrontation – such as a naval encounter over disputed hydrocarbon resources in the Eastern Mediterranean.

An increasingly autocratic President Erdogan has adopted a much more muscular foreign policy over recent years, which has seen Turkey deploy military assets to multiple theatres in its near abroad. Striking a balance between wooing and cajoling this strategic NATO member back into line is another key foreign policy challenge on Biden’s plate.

An outlier within the Interstate Tensions Model is identified by Verisk Maplecroft as the US-Russia pairing. Trump’s reluctance to challenge President Putin’s provocative foreign policies – from interfering in the 2016 US election to the 2020 SolarWinds cyber hack – is reflected in the very low probability of a military clash.

However, Biden has warned that the days of the US “rolling over” for Russia are done and we expect this tougher rhetoric to be reflected in future iterations of the model.

Separately, the model flagged escalating bilateral tensions that led to the outbreak of conflicts in the South Caucasus. While tensions between Azerbaijan and Armenia will remain high in 2021, the presence of Russian peacekeepers on the ground reduces the likelihood of a return to full-scale war. Two traditional flashpoints – the Korean Peninsula and India-Pakistan – round out the geopolitical hotspots and shouldn’t be overlooked.

Middle East as a silver lining?

One positive is the decline in geopolitical tensions in the Gulf, which has created the diplomatic space for Saudi Arabia and its allies to end the three-year blockade against Qatar. While multiple friction points remain, lifting the embargo adds salve to a sore that has undermined unity among Washington’s Middle Eastern allies.

One driver is Riyadh’s realisation that it will have less leeway under the new US administration. The ITM indicates that the prospect of Saudi Arabia and Iran engaging in a military clash in the coming months has also eased somewhat, although the regional rivalry will remain fierce.