The importance of measuring the ‘resilience dividend’

The number of disasters and their magnitude are growing at an unprecedented rate, according to a new report from Zurich.

While there has been a decline in disaster mortality (in relative terms) over the last decade, in most places there has not been significant success in halting the substantial increase in economic losses, it notes. This results in profound knock-on effects to economic growth and development as well as to the general well-being of society. Among other things, the research shows that:

The report highlights the ‘resilience dividend’. Research shows that on average, investing $1 billion in resilience early helps avoid on average $5 billion in future losses. According to Zurich, this is “a very clear case for investing up front rather than spending money only after an event to deal with incurred losses and finance repair and recovery”.

Unfortunately, present investments in protection are often viewed as nothing more than costs, whereas the losses they intend to avoid are not counted as return on investment.

”Similarly, while we tend to see present cost of investments, we don’t account appropriately for the future benefits and cost-savings they could provide, because the outcomes are uncertain – they may or may not materialise, and this may or may not be in the timeframe the decisionmaker is considering,” says the report. “We need to change this perspective.”

The paper addresses compound risks and explains why a multiple-risk radar is more important than ever. It offers the insurer’s first wildfire reviews and updates its series of post-flood studies.

”The COVID-19 crisis is another reminder that we need to constantly update our risk radar and reflect on what’s changed or is about to change and how we can better recognize the early indicators in order to prevent, prepare for and respond to an event,” states Zurich. 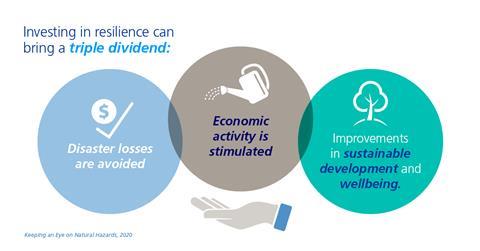