Suez Canal crisis will unveil which organisations have a strong understanding of their supply chain risk, and which do not

The Ultra Large Container Ship, MS Ever Given, grounded in the Suez Canal, is holding up traffic that carries nearly $10 billion worth of goods every day. Ship trackers and brokers report there are around 300 ships currently waiting to transit the canal.

Efforts are continuing to restore traffic on the critical man-made waterway that connects the Mediterranean to the Red Sea and provides a shipping shortcut between Europe and Asia. The quicker this can happen, the less severe the disruption to global supply chains and broader economic fallout.

According to Alex Toews, Fusion Risk Management, the Suez Canal situation will quickly unveil which organisations have a strong understanding of their supply chain risk and overall operational resilience – and which do not.

“For those organisations with a strong culture of resilience, ‘unforeseen’ or ‘unavoidable’ events won’t disrupt their ability to continue operating and delivering on their brand promise,” he said. ”After all, not all incidents can be avoided completely but the way in which you react is entirely within your control.”

“We can expect the organisations that understand their end-to-end operations and champion a sharp focus on a cross-organisational resilience to demonstrate intelligent and successful responses to this disruption.”

Fitch Ratings says the resulting disruption to global shipping is likely to cause a large loss event for the re/insurance industry. The event will reduce global reinsurers’ earnings, while prices for marine reinsurance will rise further.

The ultimate losses will depend on how long it takes the salvage company to free the container ship completely and when normal ship traffic can resume, but Fitch estimates losses may easily run into hundreds of millions of euros.

Accidents involving large container ships can cause property claims of over $1 billion, but these are mostly related to salvage. As the Ever Given should still be able to travel once freed, claims related to hull and cargo insurance, including salvage (which will be borne by the shipowner’s hull insurer), should remain significantly below this level.

However, the shipowner’s protection and indemnity club will probably also face claims from the owners of the cargo on the Ever Given and of the other ships that are blocked in the Suez Canal for losses related to perishable goods and supply chain disruptions.

According to Allianz Global Corporate & Specialty, around 10% of global trade passes through the Suez Canal. Ships face costly and lengthy deviations if the canal is not opened soon. At the time of writing, the Ever Given had been partially refloated.

The insurer notes the jam in this important trade hotspot comes at a particularly bad time for global supply chains. Car and computer makers are straining from a global chip shortage, exacerbated by a fire in a big chip making factory in Japan last week.

The Suez Canal has an excellent safety record overall with shipping incidents extremely rare - There have been 75 reported shipping incidents in total in the canal over the past decade according to the AGCS Safety & Shipping Review 2020. More than a third involved container ships (28).

However, groundings (such as the Ever Given incident) are the most common cause of shipping incidents in the canal. 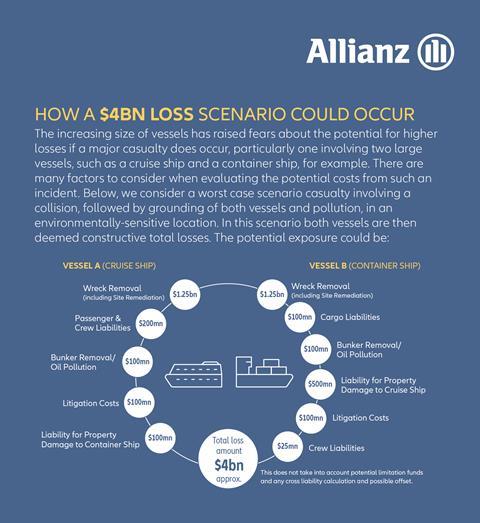