The challenges posed by a confluence of near-term challenges - including the current energy crisis - are making it less likely the world will achieve its climate transition goals as set out under the Paris Agreement.

This is according to John Scott, head of sustainability at Zurich, and one of the authors of the World Economic Forum’s Global Risks Report 2023.

Speaking at a press briefing in London, he warned it was becoming too late for climate mitigation and that corporates and governments should be moving their attention to adaptation and resilience.

“Failure of climate change mitigation is one of the most highly rated risks in the report,” said Scott. “And yet it is one of the risks we are least prepared for. Over 70% of respondents to the Global Risks Report ranked current efforts to mitigate climate change as ineffective.”

“This is unlikely to change in the near future. Why? Because what is scientifically necessary and what is politically expedient don’t match.”

At present, the global pandemic and war in Europe have brought energy, inflation, food and security crises back to the fore, according to this year’s Global Risks Report.

These create follow-on risks that will dominate the next two years: the risk of recession; growing debt distress; a continued cost of living crisis; polarised societies enabled by disinformation and misinformation; a hiatus on rapid climate action; and zero-sum geo-economic warfare.

Saadia Zahidi, managing director, World Economic Forum, noted there is a high level of pessimism amongst global leaders. “Today, they are facing multiple crises happening at the same time - ‘poly-crises’,” she said.

“Over 80% of leaders are expecting to see constant crises competing with each other and an increasingly volatile trajectory.” 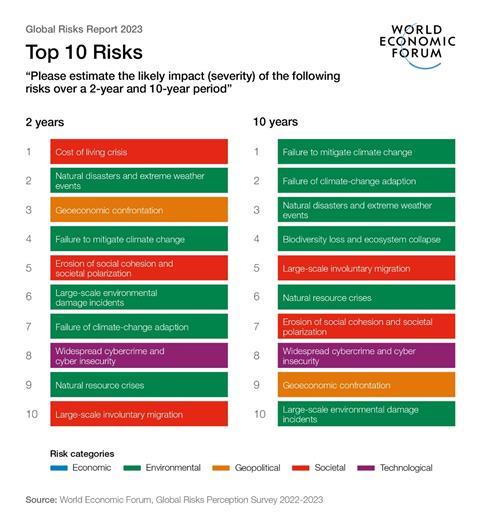 Unless the world starts to cooperate more effectively on climate mitigation and climate adaptation, over the next 10 years this will lead to continued global warming and ecological breakdown.

Failure to mitigate and adapt to climate change, natural disasters, biodiversity loss and environmental degradation represent five of the top 10 risks – with biodiversity loss seen as one of the most rapidly deteriorating global risks over the next decade.

A lack of cooperation at all levels is hindering attempts to tackle the climate crisis, said Scott. He pointed out that last year’s COP27 meeting in Egypt failed to reach an agreement on the phasing out of fossil fuels.

There are some reasons to be hopeful - including a proactive stances from the financial services sector, and green energy initiatives such as the REPowerEU plan, but not enough joined-up momentum and action.

The rapidly-worsening geopolitical landscape means this is unlikely to improve in the near term.

“We are heading towards a slower and more disorderly climate transition,” warned Scott. “We need to focus on moving more towards adaptation rather than mitigation.

“Reducing emissions should be our priority but short-term events are making it look likely that’s not going to happen. Our hopes of a Net Zero future are fading.”

There are dramatic consequences for countries that are most vulnerable to the climate crisis.

Mass migration from the more stressed regions of the world is becoming a certainty, according to the report’s respondents. For the first time, large-scale involuntary migration made it into the top 10 longer-term risks.

Topping the list of concerns looking out a decade are ’failure to mitigate climate change’ (1), ’failure of climate change adaptation’ (2), ’natural disasters and extreme weather events’ (3) and ’ biodiversity loss and ecosystem collapse’ (3).

From a business point of view, this has significant implications - in particular for global supply chains - pointed out Carolina Klint, risk management leader, Continental Europe, Marsh.

”No company is immune to societal erosion caused by the lack of availability of resources, which could produce civil unrest and instability,” she said.