Amid uncertainty over the COVID-crisis, public policy should focus on sustainable infrastructure development and inclusive growth - sigma

World gross domestic product (GDP) is expected to contract by 4.1% this year in what is so far the deepest recession of our lifetimes. The latest sigma study, “Rebuilding better: global economic and insurance market outlook 2021/22“, predicts that recovery will be slow and uneven in 2021.

Global GDP is forecast to grow by 4.7% in 2021 in real terms, below the market expectation of 5.2% growth. In this context, the sigma study finds that, amid the economic shock inflicted by COVID-19, global insurance markets have been less severely impacted than expected in the Swiss Re Institute June 2020 forecast.

Looking at countries’ economic resilience levels, the pandemic will impact each economy depending on its capacity to absorb shocks and its government policy.

Preliminary data suggest fiscal responses will be the key differentiator. Among the large advanced economies, the UK, Japan and the US are expected to see their fiscal buffers depleted most.

“For sustainable economic recovery, we need a policy reset. Public policy should focus on areas such as infrastructure, technology and climate. Building new sustainable infrastructure will have a significant impact on GDP growth,“ said Jerome Jean Haegeli, Swiss Re Group chief economist.

“In addition to smarter spending, policymakers should make more use of public-private partnerships and establish the operational and regulatory frameworks to enable greater participation of private-sector finance, including insurers’ assets, in the real economy,“ he added.

Income inequalities will further widen as many lower paid jobs were cut in the downturn and labour markets will be more severely impacted than official data indicate. For example, the official euro-area unemployment rate has remained surprisingly steady at around 7.9%.

The shadow unemployment rate, however, which takes into consideration inactive and furloughed workers as well as the officially unemployed, has reached almost 25% in Europe’s four largest economies: Germany, UK, France and Italy.

Insurance markets have withstood this year’s recession better than initially expected. After a stronger-than-anticipated first half, notably in advanced markets, Swiss Re Institute has revised its growth forecasts upwards.

It now projects global non-life premium growth will remain positive at 1.1% in 2020. It sees a rebound to 3.6% growth in 2021 and 2022, with continued rate hardening momentum, particularly in commercial lines, underpinning the recovery.

China will take the lead, and emerging markets overall will continue to outperform advanced markets. Based on global economic recovery and rate hardening, sigma forecasts a swift return to trend growth in the next two years. 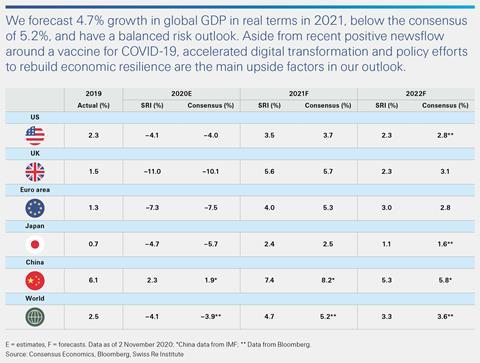