Based on previous flood events the estimated current cost of claims is now $1.3 billion.

The figure remains subject to detailed assessment of claims as loss adjustors move in over the coming weeks and is expected to increase as further claims are made.

According to satellite flood data experts ICEYE, Lismore, NSW experienced its worst flooding on record. Farmers are expecting millions of dollars of losses from flooded crops, including soybeans, rice and cane.

Insurers continue to work alongside Local, State and Federal Government stakeholders and agencies are monitoring the impact of the weather system currently impacting Sydney and surrounding areas.

Andrew Hall, CEO, Insurance Council of Australia, said:  ”As expected, claims continue to grow from this widespread event, which is shaping up to be one of the most significant floods this country has experienced.

”We will always have extreme weather in Australia, but if we want different outcomes the future Australian governments must increase investment in measures to retrofit homes and better protect communities.” 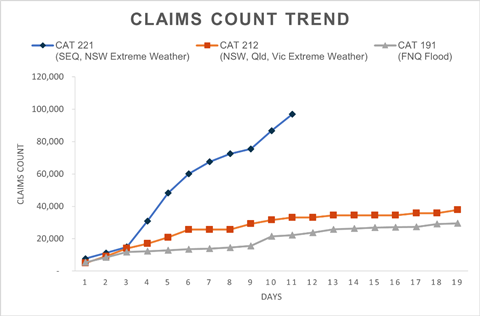