It is both stability and change in the Allianz Risk Barometer 2023. Cyber incidents and Business interruption rank as the biggest company concerns for the second year in succession (both with 34% of all responses).

However, it is Macroeconomic developments such as inflation, financial market volatility and a looming recession (up from #10 to #3 year-on-year), as well as the impact of the Energy crisis (a new entry at #4) which are the top risers in this year’s list of global business risks, as the economic and political consequences of the world in the aftermath of Covid-19 and the Ukraine war take hold.

Business Interruption (#1 with 35% of responses) is the top risk in Asia Pacific, surpassing Cyber Incidents (#2 with 32%) which ranked top for the previous three years. Natural Catastrophes (#3 with 27%), Changes in legislation and regulation (#4 with 24%), and Climate Change (#5 with 22%) make up the other top risks in the region.

Business Interruption ranks in the top three risks in all countries in Asia Pacific and is the top risk in Singapore and South Korea.

This comes as little surprise as companies need to navigate supply chain disruption, uncertain geopolitical, economic and climate risks, as well as long-term transformations such as digitalisation and decarbonisation.

Ranking second in Asia Pacific, Cyber Incidents remains a significant concern in the region, especially in Japan and India where it ranks top.

Changes in legislation and regulation rose from #5 to #4 year-on-year, keeping its place among the top five Asia Pacific risks for the fifth consecutive year, and was also the top risk in China.

Climate-related concerns gained ground in Asia Pacific. Natural Catastrophes rose from #4 to #3 year-on-year, spurred by notable events such as widespread flooding across South Asia from January to October, which led to the deaths of over 3,500 people, and the devastating heatwaves suffered by China in the sixth warmest July and August since 1880.

Mark Mitchell, regional managing director, Asia Pacific at AGCS, said, “Despite the easing of supply chains from Covid-19 related recovery, businesses in Asia Pacific continue to face significant business interruption as they need to navigate a plethora of challenges.

“This includes global shortages and inflationary pressures as a result of the war in Ukraine and geopolitical tensions, and other perennial risks in the rankings such as cyber and natural catastrophes.

“These risks, coupled with the threat of recession this year, will once again force companies to evolve and adapt their business models, as they did at the start of the pandemic.

”Businesses also need to continue to enhance resilience by working with stakeholders and partners to develop alternative suppliers and improve business continuity management.” 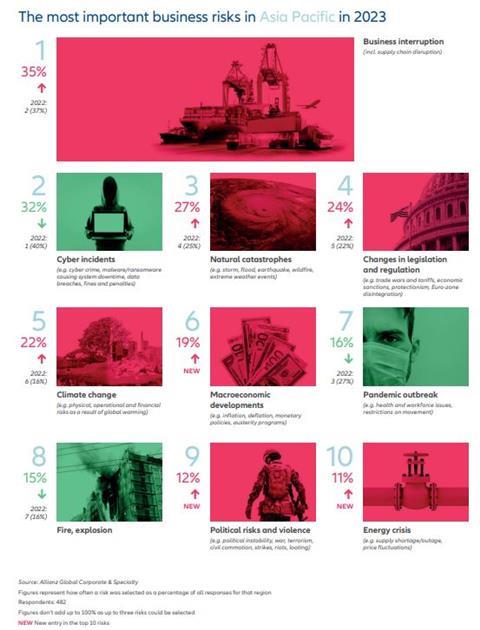 According to the Allianz Cyber Center of Competence, the frequency of ransomware attacks remains elevated in 2023, while the average cost of a data breach is at an all-time high at $4.35m and expected to surpass $5m in 2023.

The conflict in Ukraine and wider geopolitical tensions are heightening the risk of a large-scale cyber-attack by state-sponsored actors. In addition, there is also a growing shortage of cyber security professionals, which brings challenges when it comes to improving security.

For businesses in many countries, 2023 is likely to be another year of heightened risks for Business interruption (BI) because many business models are vulnerable to sudden shocks and change, which in turn impact profits and revenues.

The scope of disruptive sources is wide when it comes to business interruption (BI). Cyber is the cause of BI companies fear most (45% of responses); the second most important cause is the energy crisis (35%), followed by natural catastrophes (31%).

The skyrocketing cost of energy has forced some energy-intensive industries to use energy more efficiently, move production to alternative locations or even consider temporary shutdowns.

Macroeconomic developments such as inflation or economic and financial market volatility rank as the third top risk for companies globally in 2023 (25%), up from #10 in 2022 – the first time this risk has appeared in the top three for a decade.

All three major economic areas – the United States (US), China and Europe – are in a crisis mode at the same time, albeit for different reasons, according to Allianz Research, which forecasts recession in Europe and the US in 2023.

Inflation is a particular concern as it is ‘eating’ into the price structure and profitability margins of many companies.

Like the real economy, the financial markets are facing a difficult year, as central banks drain excess system-wide liquidity and trading volumes even in historically liquid markets decline.

“2023 will be a challenging year; in purely economic terms, it is likely to be a year to forget for many households and companies. Nevertheless, there is no reason to despair,” says Ludovic Subran, chief economist at Allianz.

“For one thing, the turnaround in interest rates is helping, not least for millions of savers. The medium-term outlook is also much brighter, despite – or rather because of – the energy crisis.”

It incorporates the view of 2,712 risk management experts in 94 countries and territories including CEOs, risk managers, brokers and insurance experts. It is being published for the 12th time.