A journey of resilience

Marie-Pier Desharnais’ story is one of resilience. Surviving the Indian Ocean Tsunami at the tender age of 19 had a profound impact on the direction her life would take, spurring her on to pursue a career in disaster response and business continuity management. And it led her to her other true passion: mountaineering.

Fresh from summiting K2 in July 2022, Desharnais spoke to StrategicRISK about her drive to test herself on every level, and why there are so many parallels between mountaineering and effective risk management.

In 2003 and 2004, Desharnais was doing what many young people do before they start university - travelling and experiencing the ‘university of life’. Growing up in Quebec, Canada, she was keen to explore some of the other corners of the globe before embarking on her degree in public relations and communications. The plan was to meet her parents in Thailand over Christmas, but on Boxing Day - their last day in Phuket - the tsunami struck.

Despite being washed away by the power of the water, Desharnais and her parents survived the catastrophe, believed to be the deadliest tsunami in history. In the years after - and even up until she began high altitude climbing seven years ago - she struggled to talk about her experiences and suffered from what she now describes as survivor guilt.

“It was a very traumatic experience and the years that followed were very hard,” she says. “I wasn’t able to make sense of what had happened and I wanted to drop out of school. I wasn’t able to make sense of why it had happened to me, and I felt that unless I could make something useful out of my life and have an impact on the world, that it didn’t make sense that I had survived when 300,000 other people had died on that day.”

She pushed herself hard. Starting her tertiary studies in PR and communications no longer felt like the right fit and it was then she discovered disaster risk management. “By accident, during an optional course about natural phenomenon and disasters, I learned that it was people’s jobs to plan and ensure we are ready. Right away I was hooked and I realised this was what I needed to do.”

She focused the rest of her studies on disaster and major risk management and went on to pursue a Masters degree, where she studied the aftermath of the Boxing Day Tsunami in the Maldives. Five years on from her own experience of the disaster, she was in a position to make sense of what had happened and use her experience to help a community that was still recovering.

“I was able to integrate a lot of the elements from my PR degree in terms of community involvement - how you integrate communities, which is a key factor in response and recovery,” she says.

In parallel to her Masters, Desharnais had begun working at Quebec’s Ministry of Public Security in Canada as a research analyst. It was her job to collect data which was used to develop the country’s first disaster recovery plan. Subsequently, she was offered the role of deputy director of the recovery administration at the age of just 25. “It was a big thing for me,” she says. “I felt like I was in my element in that role and was involved in some major events in Canada.”

From coup to Qatar

It seems incongruous that Desharnais would then find herself in one of the least natural catastrophe exposed countries in the world - Qatar - working for the private industrial sector. It was once again a trick of fate that led her there. She had been heading back to the Maldives to start her own consultancy firm in early 2012 when there was a coup d’etat and the nation’s president was forced to resign.

Fighting broke out across the Maldives and Desharnais realised she needed to find a safer place to “wait out the crisis”. With regular stopovers in Doha and a fiancé in the country at the time, Qatar seemed a good choice, although she did need some convincing.

“I wasn’t overly keen because I wasn’t as interested in industrial risk and Qatar was one of the safest places in the world in terms of natural disasters. Then I got in touch with Qatar Foundation (a non-profit organisation made up of over 50 entities working across education, research and community development) and was offered the position of head of business continuity.”

She describes business continuity management (BCM) as the ‘corporate version’ of disaster management. Her new role was a big learning curve. “The approach to risk is different for governments than it is for corporates,” she explains. “In the corporate world you’re more influenced by revenue loss, whereas the end game for governments is the people. It helped that I was in an organisation which was more driven towards education and community - but I felt that something was missing.”

“It’s hard working in an environment when you want to feel you’re achieving something but there are things that are inherently not supporting the end goal,” she submits. “Organisations will say they have a risk manager or BCM person - but what’s happening in reality is completely different. There’s a culture of people being scared to report risk.”

As a result, she has poured her energy into helping organisations improve their culture and mindset, enabling them to practice more effective risk management in an environment that rewards collaboration and transparency. “In your organisation you need to be able to bounce back [from major events], and as long as you have that mindset of being able to face the unexpected and you have the right people around you, you can face anything.”

It is the same on the mountain. Given her drive to continuously challenge herself - often in very male-dominated fields - it was natural for Desharnais to embrace the world of mountaineering, which has seen her take on some of the world’s highest peaks. Despite the many hurdles that stood in her way - including the fears of those closest to her - she has embarked upon some of the most perilous journeys ever undertaken by female climbers. 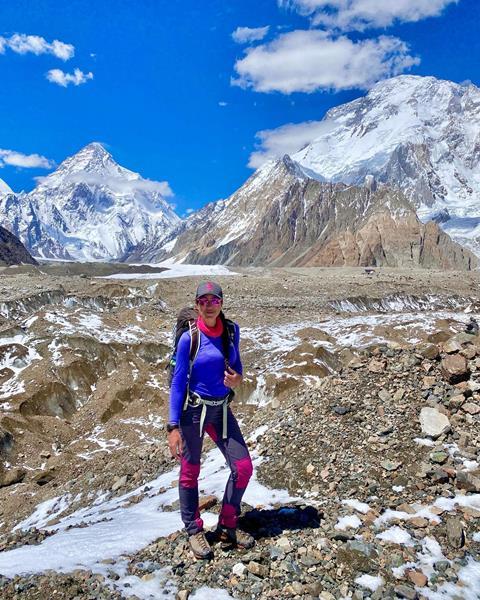 Her motivations for doing are frequently in question and she has faced more than a few critics, reveals Desharnais. What began as a journey of discovery and empowerment is now evolving into something much broader, with her desire to inspire others to achieve their goals.

“For me, there’s nothing that provides as much of an opportunity for growth and personal transformation than mountaineering. Being in the mountain, you are in an environment that is a mirror for the soul. You can pretend to be something that you’re not in the mountains, but it won’t last long because you’re tested on every level and so your true nature comes out - sometimes the ugliest parts of who you are.”

“If you have an arrogant attitude, the mountain will kill you,” she warns. “You need to be at peace with accepting your own strengths and also your limitations. It was through the process of mountaineering that I was able to embrace the vulnerabilities inside me and seek the support I needed to become even stronger.”

There are risk management analogies for organisations, she thinks. “We need to look to identify both our strengths and vulnerabilities so we can knock on the right doors and get the right help.

Inevitably, climbing helped Desharnais come to terms with the trauma she had suffered in the Boxing Day Tsunami. “Seven years ago when I started in high altitude climbing I wouldn’t have spoken about the tsunami much and now I fully accept it as part of my past, and I embrace it rather than feeling ashamed,” she says. “I was able to become a stronger person through the experience of mountaineering.” 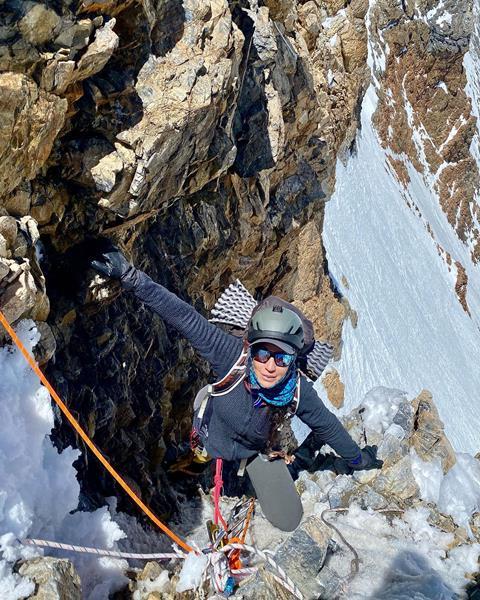 To date, she has climbed over 30 peaks that are over 4,000 metres high, including the ‘seven summits and the seven volcanic summits’. Now Desharnais is more in the game of climbing the world’s highest peaks - mountains above 8,000 metres. Her first technical peak - Ama Dablam in the eastern Himalayas, Nepal - took her to the limits of what she believed was possible.

“A lot of people were saying that this was the test in preparation for K2, which is seen as the ultimate mountaineering goal. So when I came down from Ama Dablam I thought maybe K2 is not so unattainable after all.”

This idea led to the creation of the Apex Woman Project, a quest to elevate the footprint and influence of female climbers. As part of the challenge Desharnais identified five peaks she wanted to conquer, including Everest, which she achieved in 2021. But it was reaching the summit of K2 this past summer that was the highlight of her mountaineering career.

“I was told I was crazy, that I was running after death but I kept going. On a mountain like that there is no margin for error, but I wanted to show that with the right tools, team and preparation you can achieve something that is seemingly impossible.”

Having conquered three of the five peaks as part of Apex Woman, Desharnais is still to take on the highest mountain and volcano of Antarctica, which she aims to complete in December 2022 and January 2023. In Antarctica, the logistics and cold will be the critical challenge, although she anticipates the ascent will be less technical in terms of dynamic risk management compared to K2 where “every step of the way you needed to be alert physically and mentally”.

Now that she is getting so close to achieving many of her mountaineering goals, Desharnais is beginning to think about what she will do next. She is keen to help others achieve theirs and has started to lead groups of climbers on mountain projects. She is also proving a popular motivational speaker, back in her home country of Canada. She credits Nirmal Purja - known as Nims - a Nepalese British mountaineer and star of the 2021 Netflix film ‘14 Peaks: Nothing is Impossible’, with inspiring her shift towards supporting others.

“When I climbed Ama Dablam he believed in and encouraged me, helped me to find strength I didn’t know I had. Not many people have had such a role in my life and I would like to be like that too. This is my ultimate objective now, to act as a catalyst in other people’s lives, to elevate and empower them so they can achieve their goals, in whatever way - big or small - that I can. When I leave a room after a speaking engagement and I see a spark in someone’s eyes, that is the greatest gift, to feel I have inspired someone.”