Just days after the second anniversary of MH370’s disappearance, crisis director for MH370 and MH17 and head of the Malaysia Airlines post accident office, Fuad Sharuji, speaks to StrategicRISK about responding to two of the worst air disasters in history 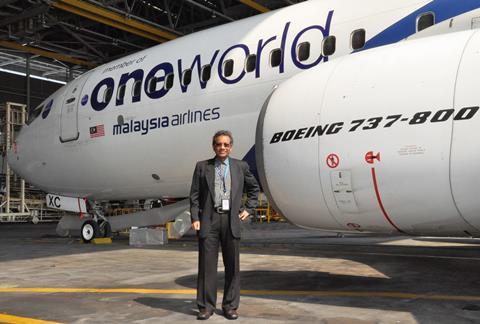 On the morning of 8 March 2014, 227 passengers and 12 crew boarded a Malaysia Airlines flight in Kuala Lumpur. MH370 was bound for Beijing, China, and scheduled to land at 6.30am. But two years on, the aircraft and all of its passengers, are still unaccounted for.

Disaster struck the airline again on 17 July 2014, when another 280 passengers and 15 crew boarded a Malaysia Airlines plane in Amsterdam. On route to Kuala Lumpur, flight MH17 was shot down by a missile in eastern Ukraine.

Speaking exclusively to StrategicRISK just days after the second anniversary of MH370’s disappearance, crisis director for MH370 and MH17 and head of the Malaysia Airlines post accident office, Fuad Sharuji, explains what the last two years have been like for him and what he has learned.

As the first point of call for operational issues such as flight delays and groundings, Sharuji was used to getting calls from his operations manager at all hours of the day and night.

But the significance of the phone call he received at 2.30am on 8 March 2014 was unlike any other before. Even now, two years on, Sharuji describes those first few moments with disbelief, but also with clarity.

“Immediately I opened my laptop, accessed the flight systems, and saw there were four other aircraft that were in the vicinity of where MH370 was supposed to be, but 370 was not in the picture at all,” he says.

After several attempts to contact the plane through satellite communications, air traffic control centres and nearby aircraft, the severity of the situation became quickly apparent. Just before 3am, 30 minutes after that first phone call, Sharuji declared a code red emergency.

Within an hour, most members of the airline’s emergency operations committee had assembled at the airport, followed soon after by an emergency response working group, ‘go teams’, and a special assistance team.

Fast forward to 7am, half an hour after the plane was scheduled to land, Sharuji received a phone call from CNN asking where MH370 was. After that, news spread almost instantly around the world that the aircraft was missing.

“We told them (CNN) that we couldn’t confirm what had happened to the aircraft because we just did not know where it was, but we confirmed that we had lost contact with the aircraft,” Sharuji says.

This is where one of the key challenges for responding to the crisis stems: in Malaysia, the Department of Civil Aviation is responsible for any search, rescue and repatriation efforts for a crisis of this kind, not the airline.

“The airline has no control over these functions except to communicate with [the government] and to provide any assistance that they want from us,” Sharuji says. “Our concentration at that time was to search for the aircraft that might have gone down. It was like groping in the dark.”

Based on the information Malaysia Airlines had to hand, their best guess was the South China Sea. They later found out that this was wrong, but only after the government moved its search efforts, owing to new flight signals that indicated the plane had taken a u-turn.

“By morning we were told that the search mission had been launched but we didn’t know exactly how many ships or planes [had been] deployed,” he says.

All the while, Sharuji’s team was receiving tips on possible sightings of the plane. From Vietnam oil riggers who said they saw a ball of fire falling from the sky to beach goers around South East Asia that reported hearing a loud explosion, the reports were many and varied.

“We tried to respond to every single thing that we heard and every time we relayed that to the RCC – the rescue command centre – run by the government,” he says.

But it seems the communication was not two-way.

“From the public’s perspective they thought that there was a lot of cover-up and we were withholding information, which is actually not true because we also didn’t know,” Sharuji says.

As the hours turned into days and days into weeks and months, the priority of Sharuji’s team was looking after the next of kin, of which there were more than 1,000 in Beijing alone.

For almost two months the airline paid for accommodation, meals, counselling and other basic living expenses of those 1,000+ individuals who claimed next of kin status for the 153 Chinese nationals on board MH370.

“We didn’t expect it to be that many because China had a one child policy, so it was quite overwhelming for us,” Sharuji says.

By way of comparison, there were 192 Dutch passengers on board flight MH17. So when that plane went down, Sharuji briefed his team to expect about 600-700 next of kin at the Amsterdam airport. Instead, only 50 required assistance and all of those returned to their homes within one week.

As the search for MH370 continued and new information was received, experts eventually agreed that the most likely place that the plane went down was in the South Indian Ocean off western Australia.

“I know it’s a bitter pill to swallow but this is the truth and we’ve just got to accept the fact that we have lost the aircraft and there’s no possibility at all under the harsh condition of the ocean that there are any possibility of any survivors,” Sharuji says.

While many have accepted this explanation, there are still those that, without concrete evidence, refuse to believe it.

“We still receive letters from [Chinese] next of kin to ask me to ask the government to return their loved ones back to them alive,” Sharuji says.

The certainty of what happened to MH17 made the second crisis “much easier” for Sharuji and his team to handle from a crisis management perspective. That, and the efficiencies of the Dutch government’s response plans, Sharuji says.

Sharuji, now 60, has been with Malaysian Airlines for his entire career.

He joined the country’s national carrier straight after high school and was sent to England in 1976 to complete an engineering degree.

For more than two decades the Kuala Lumpur native worked in the aircraft’s engineering team before moving to the operations department in 2005 and in 2009 he became the group’s vice-president of operations.

Last year when the airline went into administration, Sharuji decided to stay with the old company, rather than move to the new airline, to see out his focus of the two crisis events.

In the aftermath of both crises, several media reports suggested that the airline did not have tried and tested crisis plans in place. But this is incorrect.

In fact, just three weeks prior to MH370’s disappearance, Sharuji had conducted a full emergency response exercise; and the similarities between the ‘practice’ event and MH370 are not lost on him.

“The [practice] scenario was a 737, departing Kuala Lumpur, which then had an engine failure and crashed in the Straights of Malacca and we lost contact with the aircraft,” he says.

“Even though our [emergency operations centre] is not sophisticated … our emergency response plans are very comprehensive and very detailed,” he says.

Overall, Sharuji says he was “very happy” with how his emergency response teams reacted to both crises.

“We made a few mistakes here and there and we corrected those mistakes almost immediately. But, on the whole, we handled the two crises extremely well,” he says.

That’s not to say that Malaysia Airlines’ response was perfect, however.

Sharuji says the events highlighted some “loopholes” in its response plans.

“There were quite a number of assumptions that we made and we realised that the assumptions were wrong,” he says. “For example, we thought that the way we would handle the Malaysian Chinese next of kin [in Kuala Lumpur] would be the same as the Chinese Chinese [in Beijing] but we were wrong because the culture and the behaviour is extremely different.”

The importance of choosing the right crisis team leader – known as a ‘go team’ leader at Malaysia Airlines – also became apparent in the crises.

“You can have a person who walks like John Wayne and talks like Tom Cruise during peace time, but during war he can become like Mr Bean,” Sharuji says. “That person must be very strong and very level headed, and very composed and calm even under extremely stressful conditions and it’s not easy to find.”

A few days into the MH370 crisis, Sharuji’s ‘go team’ leader in Beijing had to be replaced as he was unable to cope with the stress.

“One of the things that we have done is put in what we called management advisors – this is in addition to the go team leader, who actually manages the crisis teams, the handling of the next of kin, the family assistance centres, support and so on,” he says.

The role of the management advisors is to act as a liaison between the airline and the government during a time of crisis.

“We made quite a lot of changes in our corporate emergency operations manual after MH370 and MH17,” Sharuji says.

“The structure of the go team is also slightly changed, we changed some templates, and we changed some of the training programmes to include diversity and cultural handling.

“We also changed our process in dealing with the government, or government relations.”

One of the main challenges for responding to the 370 crisis was that the event was unprecedented.

“In modern aviation history we haven’t [had] any other airlines that have lost an aircraft for as long as MH370 and because of this we were handicapped,” Sharuji explains. “We were also handicapped by government intervention and government bureaucracy,” he says.

But the key lesson that Sharuji has learned from these events is that airlines must always be prepared.

“We cannot be prepared for every single conceivable scenario but you have to be prepared to react to any given situation,” he says.

The importance of good government relations is also a key takeaway for Sharuji.

“My next step is actually trying to work very closely with the government in helping them bridge the gaps that we had before. That is to me the most important thing in my wish list right now – to bridge a gap that we have in the crisis management programme between us and the authorities,” he says.

Fuad Sharuji, head of the Malaysia Airlines post accident office and crisis director for MH370 and MH17, will be the one of the key speakers at this year’s Strategic Risk Forum in Singapore. Held on 17 May at the InterContinental Hotel, the third annual event is free for risk and insurance managers to attend by pre-registration. For more information about the event, or to apply to attend, click here.