All roads lead to China: an interview with IHG's Rudi Wertheim

A nous for risk management and a love of China have come together for the Intercontinental Hotels Group director of corporate risk and reputation, greater China 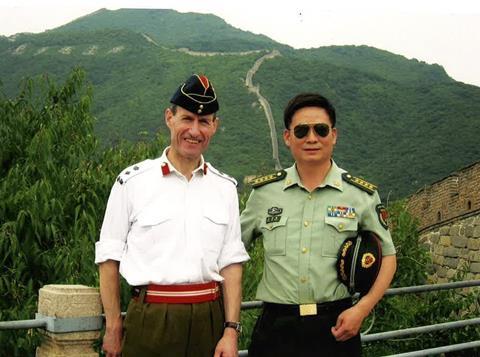 He speaks five languages, has lived in nearly 30 cities around the world, and spent 34 years in the British Army. But in September last year Rudi Wertheim swapped his military boots for a suit and tie in his new challenge as director of corporate risk and reputation, greater China, for Intercontinental Hotels Group (IHG).

“It’s the perfect combination of my love for China and my experience of managing risks,” Wertheim says.

Born and raised in London, Wertheim’s love affair with China was sparked when he was just 15 years old when he visited a Chinese museum exhibition.

“It got me fascinated in China and everything just went on from there,” he says.

Wertheim grew up speaking German and English in his family home but went on to study Chinese at Cambridge University; a choice, he says, that his friends and family at the time said was “barking mad”. He was one of just four students in the course.

“I don’t claim that I had some great intuition that China was going to develop in the way that it has, but I thought that very little attention was being paid to a country that had one-quarter of the world’s population that you simply couldn’t ignore it, but a lot of people did,” he explains.

While studying at university, Wertheim decided that he wanted to join the military. His intention was to stay for three years and “then come out and find a job where I could use Chinese”.

But one assignment kept leading to another and 34 years later Wertheim was forced to leave the Army after serving the maximum tenure. He retired as a brigadier, having traveled the world from Ireland to Bosnia, Islamabad to Calgary, adding French and Urdu to his dialect bank, and working his way up the ranks to command the Queen’s Royal Lancers.

But it was his post in Beijing that was one of his most memorable and a place where he always wanted to return.

So why risk management and why IHG?

“I didn’t just want to go to a job where China and [speaking] Chinese was the only contact I had with the organisation. I wanted something that I found interesting and challenging and that I actually felt there was something I could help make a difference, rather than fill a post,” he says. “I have also stayed in an awful lot of hotels, so felt that I had ‘user’ experience of the hospitality industry, if nothing else.”

Wertheim also believes that while the risks encountered in the army might seem very different to those of the hospitality industry, there are also many similarities.

“In the military the circumstances are different and the risks might be different but the principles and the procedures for dealing with risks are the same,” he says. “We both face pressing talent risks, security risks, programme risks and so on, which we need to assess and mitigate in our respective ways.

“Military planning is very much based on knowledge of what one’s up against – regardless of whether it’s in a combat situation where you need to know as much as possible about your enemy so you can assess their intentions – or in a staff situation where we use a very similar planning process, and I wouldn’t say in this regard it’s any different from what any sensible company does. It assesses what the challenges and risks and the opportunities are as a key part of formulating its strategy.”

An ability to think quickly and decisively has also proved helpful.

“In the military some of the threats can be extremely imminent and life threatening and so one needs to develop an ability to make assessments of the risks and opportunities fairly instinctively because you haven’t always got time for detailed planning or research,” he says.

In his new role at IHG Wertheim’s remit is looking after the operational risk for the hotel group in greater China, which includes its corporate risk and reputation.

Globally IHG has nearly 5,000 hotels, in nearly 100 countries and territories, and with 161 million guest nights per year. It’s a unique business model, however, with only a small handful of those 5,000 hotels being owned by the group. Rather, the vast majority are operated in a franchise model and are managed by IHG on behalf of the individual hotel owners.

Within Wertheim’s remit, he is responsible for about 230 hotels that are located in China, Hong Kong, Macau, Taiwan and People’s Republic. That number can change weekly, however, with hotel management deals regularly changing hands.

So what are the top risks currently keeping Wertheim busy?

Ethical business practices, local compliance, people risk and reputation are all top of his list.

“There are obviously threats that are common to all businesses, particularly overseas businesses [in China], and that is the need to do business ethically and in accordance with the law and to make sure that we’re compliant with both our own corporate policies and China’s standards and policies,” he says.

There are also significant challenges associated with growing the company in some of the region’s outlying areas.

“Greater China is where most of the potential for expansion is, but where the market is much less well developed and the pool of talent is less easy to find in the more developed cities,” Wertheim explains.

“The further out you go from the big cities, the harder the competition for suitable talent at all levels to work in the hotels.”

Like many companies, the group’s ‘people’ strategy is currently owned and operated by the human resources team. But Wertheim says it makes sense for risk professionals to become more involved.

“What I’ve done in that context is talk not just the senior people, but their key staff and local staff as well because they’re the people who really know what the emerging risks are likely to be in their area and help come up with some of the solutions to managing them.”

Reputation is also an area of risk management that IHG, and Wertheim, take very seriously.

“The risk environment that we operate in can be difficult to predict and is rapidly changing,” Wertheim says. “There are many risks that could impact the group’s brands and reputation and, therefore, IHG is placing particular emphasis on developing its reputation risk management capability.”

So what does it take to manage the reputation of a global hotel brand, particularly in an age where bad news travels fast thanks to the likes of Tripadvisor and social media?

“No matter how good your reputation is there’s always opportunities and potential to improve it and obviously any one incident can have pretty catastrophic impact,” Wertheim says.

“You only have to look at what happened to Thomas Cook to see how the handling of a single incident can have a huge hit on your reputation.”

The case Wertheim refers to involved two young children who were killed by carbon monoxide poisoning due to a defective boiler at a hotel owned by Louis Group but managed by Thomas Cook. Following the event the parents of the children said Thomas Cook’s reputation appeared to be worth more than that of their children’s lives.

“It shows you can never be complacent with your reputation,” Wertheim says.

To help proactively measure and monitor IHG’s reputation, Wertheim and his team in greater China are involved in a pilot project with the UK Reputation Institute.

The aim is to measure and quantify the group’s reputation using a variety of methods of measuring stakeholder feedback, from media monitoring to questionnaires.

“We want to initially measure the company’s reputation with the informed general public and then subsequently we will seek to combine that measurement with the reputation feedback we get from guests, from owners and from employees. So [we want to hear from] lots of different stakeholders whose take on the business is very different,” Wertheim says.

The interim results from the pilot have been submitted and the next step is to implement strategies to improve or maintain the reputation score and then roll the programme out globally.

One of the options that some firms are exploring when it comes to mitigating their reputation risk is insurance.

But this isn’t currently on the table for IHG.

When it comes to risk management going forward, Wertheim’s goal is to move beyond dealing with current risks and start looking at emerging threats.

“I want to help people identify those [threats] and make them think how they will challenge the business and how those challenges and threats can be turned into opportunities before they hit us,” he says.

It’s the words of someone who’s used to expecting the unexpected and anticipating an ever-changing risk environment.

And wherever the next threat might come from for IHG in greater China, former brigadier Wertheim doesn’t want to be taken by surprise.