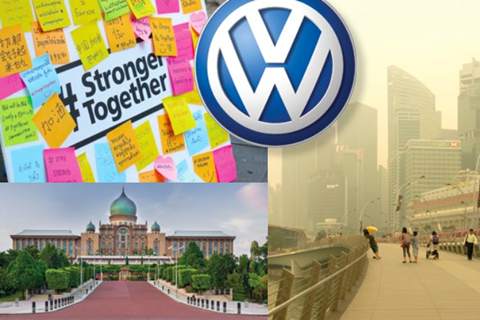 The explosions that killed 114 people and injured more than 700 others in the Chinese port city of Tianjin in August 2015 are likely to cost insurers more than $3bn. In what is expected to be one of the largest man-made insurance losses in Asia, most claims are expected to come from motor, cargo, liability, and property.

Implications: The Tianjin explosion was a sharp reminder to risk managers of the need to have robust, crisis management and business continuity plans, particularly when it comes to supply chains.

On 13 November, a series of coordinated terror attacks occurred in Paris, with suicide bombings and mass shootings at cafés, restaurants and a music venue. The attackers killed 130 people, including 89 at the Bataclan theatre, and left hundreds more injured.

Implications: Scentre Group chief risk officer Eamonn Cunningham said: “In the past 12 months, a number of tragic events have reminded us that this is not simply an overseas issue that we need to reflect on, but rather one that is clearly active domestically.”

In July, the Wall Street Journal reported that nearly $700m of Malaysian state funds had been traced to bank accounts belonging to Najib Razak. The prime minister denied taking any money and an investigation is ongoing.

Implications: Speaking to StrategicRISK, one risk manager said: “The perception is that the government is not in control and they don’t know what they’re doing, and that effects the market and the currency.”

Implications: The Ashley Madison incident is one of a number of high profile data breaches this year further highlighting the immediate threat of corporate cyber-attacks. Lockton and Willis both told StrategicRISK that client requests on cyber insurance had grown following the breach and this is only expected to increase.

Implications: Three independent reports, published as early as 2013, state that emission falsehoods are an issue for the industry, not only VW, so expect widespread scrutiny and regulator involvement of the entire automotive industry.

During the evening rush hour on 17 August, a deadly bomb went off in Bangkok near the popular Erawan Hindu shrine, killing 20 people and injuring more than 120.

Implications: BMI Research Asia economics research analyst Chan Jin Lai said the bomb blast would cause further setbacks to the country’s fragile economy and tourism sector, which are both still recovering from the military coup of May 2014.

In May, XL Group completed the acquisition of Catlin Group. Then in July, ACE revealed its plans to buy property and casualty insurer Chubb.

Implications: Risk managers voiced concerned about the consequences of the deals on competition and price. “[There will be] less places to shop around and a lack of client focus as carriers are drowned into internal re-organisations,” PARIMA chairman Franck Baron said at the time. Others said they hoped the deals would encourage new players to enter the market.

Violence and civil war in Syria and Iraq have displaced millions of people this year. Every day thousands have crossed into Europe, which is experiencing its largest influx of refugees since the WWII. The crisis has sparked worldwide debate, has vast political and economic implications, and is also threatening the collapse of the Schengen Agreement.

Nearly 200 risk managers from around Asia-Pacific descended on Singapore in April for the second annual StrategicRISK conference. The third annual conference will be held on 19 May 2016.

In October, PARIMA confirmed its partnership with Federation of European Risk Management Associations (FERMA) to offer the new risk management certification framework to its members. See page 1 for more.

The Islamic State of Iraq and Syria (ISIS) is a brutal jihadist group that was barely heard of 12 months ago. Today, Indonesia and Malaysia are among a reported 80 countries that have seen large numbers travel to the Middle East to fight in war crimes and terrorist attacks.

Implications: Terrorism risk continues to rate highly in global risk management surveys and the rise of ISIS this year has again put the threat back into the spotlight for global corporates.

A Russian Metrojet flight came down in Sinai on 31 October, killing all 224 on board. When StrategicRISK went to press the cause of the crash was still under investigation, but the US and the UK have both said intelligence points to the strong possibility the crash was caused by a bomb - militants affiliated to the Islamic State have claimed responsibility.

Implications: We hope others take SMRT’s lead and promote the fantastic work being carried out by risk managers across the region.

On the morning of 7 January, two brothers forced their way into the offices of the French satirical weekly newspaper Charlie Hebdo in Paris and killed 12 people and injured 11 others. Four days later about two million people, including more than 40 world leaders, met in Paris for a rally of national unity, and 3.7 million people joined demonstrations across France. The incident highlighted the unpredictable nature of terrorism risks all around the world and a tightening of internal security.

Implications: Willis clients across Asia stand to benefit from a far wider offering in terms of products and services, particularly in the area of people risk. But will it be enough to change the pecking order of the large global brokers?

The Association of Southeast Asian Nations (ASEAN) is intensifying efforts to realise by 2015 the ASEAN Economic Community and achieve a single market and production base, allowing the free flow of goods, services, investments, and skilled labor. The new market has the potential to be one of the largest economies in the world, which would change the global economy as we know it.

Strategies for stopping new viruses were once again being put into action, with the Middle East Respiratory Syndrome (MERS) outbreak in South Korea in June 2015.

Implications: While MERS remained contained in Asia, the incident highlighted the need for risk managers to review their protocols for managing infectious diseases.

20. Zurich and RSA’s marriage and divorce

In July, Zurich announced its intentions to purchase rival insurer RSA. But in September, the insurer completed a 180 degree turn on the plans and pulled out of the deal. Now the world knows that the remains of RSA are up for sale, who will be first in line?

21. Asia-Pacific captive numbers on the rise

Implications: Insurers and brokers have been educating the market on the benefits of using a captive for some time. Could 2016 be the year of the captive? ­­

In February, Australian company Patties Foods recalled bags of its Nanna’s frozen mixed berries over a potential Hepatitis A contamination. Berries sourced from supply chain partners in China and Chile were deemed responsible for the contamination.

In July, the US, China, France, Germany, Russia, and the UK signed a nuclear agreement with Iran. The deal ended decades of economic sanctions against Iran in exchange for restrictions on its nuclear programme.

In July, trillions of dollars was wiped off the Chinese stockmarket and a new crackdown on market manipulation and misselling of investment products by the securities regulator failed to stop the falls.

Implications: While stock market performance and economic growth are not necessarily linked in China, “slowing growth is a positive corollary of Xi Jinping’s efforts to take China to the next level as an economy,” Control Risks director of global risk analysis, Asia-Pacific, Steve Wilford said. “But there are short to medium-term dangers that growth could get really slow and you could see a spike in social unrest issues.”

In October, smoke haze caused by raging forest fires in Indonesia engulfed the country and its neighbours sparking widespread health concerns. The effects of the haze have been far reaching with winds spreading the haze to Singapore and Malaysia where schools have been forced to close, events cancelled and flights delayed.

Implications: There are risk implications for organisations in the areas of business continuity and workforce health and safety, with the initial impact of the haze felt most keenly by the travel and tourism industries.

Greece is now receiving much-needed funding from a third eurozone bailout - worth about €85bn ($95bn). It follows the country voting ‘no’ to exit the Eurozone and the resignation and subsequent re-election of president Alexis Tsipras this year.

Over the past six months most of the big players in the commodity market have lost 50% on share prices. The marine sector, in particular, is at destructively low rates. It’s no surprise then that economic conditions has topped the StrategicRISK Asia Risk Report Survey (see page 1).

Malaysian Airlines boss Christoph Mueller said in May the company was “technically bankrupt” and announced a restructuring plan involving 6,000 job cuts. The airline will undergo a “brand refresh” as it attempts to rebuild confidence following the twin disasters of MH370 and MH17.

The gap between insured and total losses is widening, with only 30% of catastrophe losses covered by insurance over the past decade. A recent report by Swiss Re said that the remaining 70% of losses, estimated to cost $1.3 trillion, were paid by individuals, firms and governments.

The global insurance industry is undergoing significant regulatory change. Most notably, a number of regulators in Asia-Pacific are either introducing risk-based capital (RBC) or revisiting their existing RBC frameworks.

Implications: Regulatory risk will remain a top concern for companies operating the region with the pace of regulatory change and enforcement unlike to abate in 2016. Time will tell what kind of impact on pricing RBC revisions has to counter capacity increases.

Think we missed something? Email me at: Jessica.reid@nqsm.com.